What’s in a Word? Plastics.

“I just want to say one word to you. Just one word… are you listening?”

That scene from the movie, “The Graduate” could characterize the subtext in Houston, where we recently spent three days studying the current state of the global petrochemical industry. Uncovering opportunity within that enigmatic imperative “Plastics.” does, as the movie suggests, take some thought.

“The Graduate” was released in 1967, so what’s new about plastics? Demand and supply. Specifically, unprecedented new demand from Asia continues to grow rapidly, and the new supply comes from America. The fracking revolution has brought America a windfall of cheap and abundant natural gas. While plastics can be made in other countries where crude oil is available, the production cost when using oil (naphtha) is significantly higher than when starting with natural gas (ethane), even with the decline in oil prices. 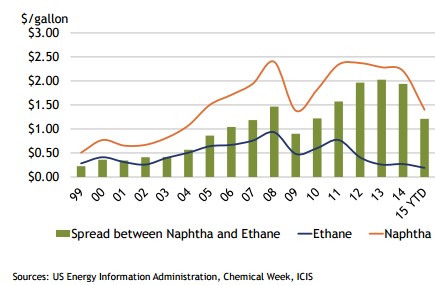 In huge industrial facilities, components of natural gas such as ethane, propane and butane are used as the raw materials in making the polyethylenes, polypropylenes, etc. that are found everywhere: bags, boats, bottles, clothes, carpets, cars, containers, cups, currency, gloves, glues, glasses, paint, pipes, plates, tubes, tires, toys, utensils and upholstery to name just a few. Moreover, new plastic formulations for additional applications are furthering boosting demand. For example, the newest commercial airliners, the Boeing 787 and Airbus A350, are both made largely (50% and 52% respectively) of high tech plastic.

Recent work by Nexant Consulting found that between 2014 and 2030, U.S. net plastic resin exports will more than triple, rising nearly $15 billion from $6.5 billion to $21.5 billion. Since 2010, construction of nearly $48 billion of new plastics manufacturing has been announced, much of that located near the port areas of Texas and Louisiana.

Chicago Bridge and Iron and Fluor benefit from this cyclic boom, being among the few companies in the world capable of designing and constructing these immense facilities. These companies can also be expected to benefit from another $70 billion in new investment in other chemical manufacturing resulting from the U.S. shale advantage.

To appreciate the scale of these ethane projects, consider the following quote regarding a current Fluor project for Sasol:

“As part of Sasol’s plans to strengthen its position in a growing global chemicals market, the company is developing a world-scale ethane cracker and derivatives complex that will roughly triple its chemical production capacity in the United States. 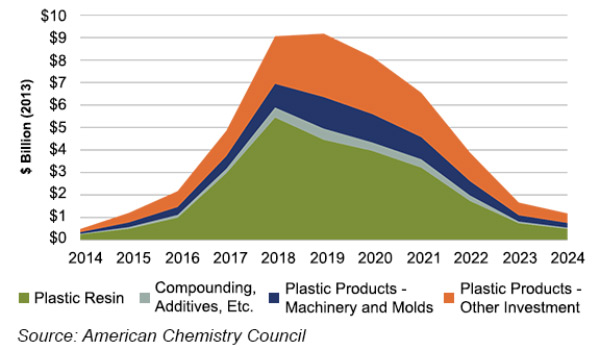 Analysis by the American Chemistry Council indicates that, when these many plastics facilities come online over the next decade, a combined 461,800 direct, indirect and payroll-induced new jobs will be created due to shale-advantaged plastics production. This new plastics manufacturing can also be expected to contribute to a more general manufacturing renaissance, which in a virtuous cycle, increases demand for plastics. Plastics materials makers pay workers on average nearly $85,000, more than 70% higher than the average U.S. worker. Under this scenario, it is conceivable that even our holdings in St Joe Company may benefit.