Walking the floor of the CAMEX 2014 at the Orlando convention center, a new trade show put on by the Composite Industry, the visitor gets the impression that sometime before the end of this century everything will be made out of plastics. There were planes, automobiles, light weigh propane tanks, and cowboy hats. In most of these cases the composites in the exhibits are lighter, stronger and prettier than the traditional materials. 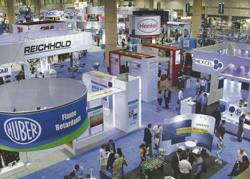 Yet, the bottom line is that composites used as structural components for buildings or vehicles are still time consuming and difficult to make and that they are considerably more expensive than traditional materials. Estimates for total composite production in 2014 are for less than $9 billion so, in real terms today, the business is tiny compared to sales of the materials they seek to replace. One exception was an exhibitor of composite pipe for used in transmission of products within oil and gas and petrochemical facilities, and for the transmission of finished products to the eventual customer. This CAMEX 2014 exhibitor claimed his product is 25% cheaper than steel.

Composites used to make LED light bulbs make bulbs that are more expensive than incandescent bulbs but can reduce annual the cost of lighting a home from an average of $300 to $40.

FlightSafety had a booth at the CAMEX 2014 to advertise their composite technician training program in West Palm Beach where they offer training in the repair of composite aircraft structures and advanced composite fabrication. Flight Safety was also present at the Phoenix MRO show where a different division of the company was selling its programs for pilot training at the FlightSafety Academy in Vero Beach Florida, aircraft maintenance at Dallas, St Louis, 10 other sites worldwide and, and cabin crew training at Atlanta, St Louis, Savannah, Teterboro, or Long Beach.

FlightSafety was acquired by Berkshire in 1996 for $1.5 billion, when the companies revenue was about $3 billion there is no way of guessing what FlightSafety would be worth today but their operations have expanded extensively into many new types of training, so it is a lot more valuable than what it is carried on Berkshire’s books. 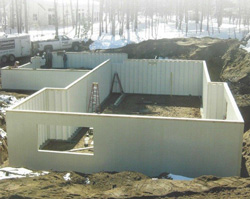 Yet walking the CAMEX 2014 there are many interesting and beautiful displays from car bodies to countertops. There is a wall section for the replacement of the concrete foundation for single homes that is light weight, can be assembled in one day at the construction site. It is completely moisture proof and with an R value of 16.5 that can be increased to R-30 with batt insulation. That will make basements drier, cheaper to heat, and environmentally friendly.

There is a body panel from the 2014 Corvette with a finish that looks more luxurious than anything ever seen on metal, and with contours that could never be stamped out of steel.

Advances in resin design for the composites will make them stronger lighter and cheaper in the future. The rapid decline in energy costs in 2014 will certainly lower the cost of the resins these products are made from, may make composite products more competitive in the not to distant future.

Because of the high cost of aviation fuel, composites are already important in the construction of the newer models of commercial aircraft, with some 65% of the structure of the wings and fuselage of the Boeing 787 and the Airbus A-350 made with composites. With improvements in resin design and simplification of fabrication processes we can expect composites to continue to replace the use of traditional materials for the next decade. The talk at the CAMEX 2014 was that eventually mandatory fuel economy standards will greatly expand the composite content of cars and light trucks In this country as they are forced to comply with ever more restrictive fuel economy standards.

One example of the advantages and cost problems of these products was a very pretty propane tank made entirely with composite materials, it weights half as much as the traditional steel tank. It will not rust and will not explode, is transparent so you can always see how much fuel you have left. The problem today is its cost ($129 compared to $29.99 for a steel tank).