For Wall Street and a large segment of academia, The bible On investment management is a discipline called “Modern Portfolio Theory”or MPT for short. It is a set of rules first developed by academia in the 1960’s and 1970’s, and is based on the premise that broad diversification across many assets classes reduces portfolio risk, this school of thought defines risk by measuring volatility. With risk defined in this manner, Modern Portfolio Theory recommends that an investor approaching retirement should hold a portfolio heavily weighted to fixed income with equity investments widely diversified.

The fact that this system was developed by academia has given it more credibility than it deserves. “Modern Portfolio Theory” has been accepted by most regulating agencies, and many of the rules that govern securities trading are based on it. It has been universally accepted by all the largest banks and money management firms, not because it serves the interest of investors, but because it gives them cover for their mediocre performance.

Performance at large money managers is largely determined by size. The bigger the firm in assets under management, the harder it will be for the manager to out-perform. Warren Buffett says size is “huge anchor”. Any chance at outperforming the popular indexes is basically eliminated once the manager passes $20 billion in assets under management. With all of the large firms managing hundreds of billions to trillions, the most they can hope for is modest under-performance, and MPT provides a convenient cover. The client is sold bonds to reduce volatility, and most clients will accept that this is done to reduce risk, because volatility makes them nervous.

We attended our first Berkshire Hathaway annual meeting in May, 1993. Although attendance at these meeting keeps going up, the message does not change, and make no mistake, the message you take from a Berkshire meeting is quite a bit different from anything you will hear coming from Wall Street or the best MBA schools. It took a few years for me to realize that Warren Buffett’s approach was radically different from most large money managers, but it is.

The message began to soak in during one the early meetings I attended. When a shareholder asked a question about MPT and after Warren responded with a polite explanation of his areas of disagreement, Charlie Munger summed up Warren Buffett’s their response by declaring, “Modern Portfolio Theory is twaddle.”

And while I thought that position rather radical at the time, Charlie Munger’s response stuck with me. It was a few years before I realized the implications of his response. Here is a doctrine taught by all the major Universities, accepted as religion by all the major money management firms, and by the regulating agencies, yet Charlie Munger labels it as “Twaddle”. This was an important point for me because I realized that things accepted completely by Wall Street were not provided the same respect here in Omaha.

Over the years, at further meetings, Charlie Munger’s objections have been fleshed out by specific points of disagreement by a few Warren Buffett quotes.

“Bonds should have no place in the average investors portfolio.”

”Volatility is not risk”

“Volatility is your friend.”

And finally from Charlie Munger, “The investor should follow five stocks and own two.”

This is not exactly a widely diversified portfolio. While the investor should not take all of Charlie Munger’s quotes too literally, volatility is better as your friend, because it is best to to be greedy when others are fearful.

But MPT teaches us to avoid volatility by buying fixed income, and diversifying our investments (Charlie Munger calls this diversification an wonders why the investor benefits from putting money in his twentieth best idea). The chart below lists the return the last 118 years on different classes of investments. Equities returned 5.20%, bonds, 2.0%, and treasury bills, 80 basis points. So an investor who sought to reduce his volatility by holding a portfolio with 40% bonds and 10% T-Bills would have reduced volatility, but cut return and the eventual size of his holdings by one-half to two-thirds.

But the real elephant in this room is inflation. For the last fifty years the rate of inflation was 4.07% per year and were most bond funds would have struggled to achieve real return of 1% to 2%.

This helps us to understand Warren and Charlie Munger’s recommendation of investing in equities. It is important to note that this advantage only holds for long term positions as there have been shorter term periods when bonds have done better relative to equities than are indicated by these very long term statistics.

Volatility is not a permanent loss of capital unless you sell when you should have been buying, generally the result of panic caused by paying too much attention to the market. The problem is that markets are made up of investors and investor are human as such subject to all human misjudgments. Humans have been genetically encoded to flee from danger. Those of ancestors with a strong flight response to danger were most likely have survived and have their genes passed down to the next generation. The problem is that this response, while very beneficial when being chased by a tiger, is the worst possible response for an investor being chased by a bear market.

Modern Portfolio Theory is based on an approach to investing that was popular in the Nineteen Seventies and Eighties when Economists where trying to turn Economics into a hard science, convinced that a stock’s price was a rational expression of the companies value, and markets were efficient. This school of Economists has come under attack in that last few years by a growing group of economists that call themselves behavioral economists. Behavioral Economists do not accept that Markets are efficient (or rational) and that the study of markets is more related to biology than it to physics or math.

A chart of interest rates since 1955 shows a huge fluctuation in these rates, and it is difficult to make broad generalizations. Obviously, there was a time in the early nineteen eighties when rates from fixed income investing were attractive, but keep in mind that inflation was very high also and the net real return after inflation was not that high.

The last time interest rates were as low as they are today was after World War II in the fifties and sixties. This was a poor time to buy long term bonds because starting in 1965 inflation was increasing rapidly and bonds purchased before the start of the increase in rates where quickly showing negative rate of return because the interest rate paid by those bonds was less than the inflation rate, investors were suffering a constant sharp loss of purchasing power.

There is no way to know the future course of inflation, but a return to a period where inflation increases more rapidly that it has for the last ten years presents the possible of loss of purchasing power to the investor buying bonds today. For the investor approaching retirement, this is a danger that should not be ignored. While it is unlikely that we will see another period like the nineteen seventies when we experienced years of double digit inflation, it is equally unlikely that the future will hold long periods like the last ten years were inflation remains below 2%.

The second area were Warren Buffett and Charlie Munger disagree with Modern Portfolio Theory is in its attempt to measure risk by measuring volatility. As the chart below shows Berkshire Hathaway’s stock has always shown a good deal of volatility. In fact, during the period we have held it the stock from August 1987 to August 2018 it has experienced three 50% or near 50% corrections, one of 40% correction (1991).

In this case, as in many other cases, volatility was a very poor reflection of any actual risk faced by an investment. In all of the above instances there were many ways to invest money that would have demonstrated less volatility, but eventually exposed the investor to a great deal more risk.

For the retired investor, Modern Portfolio Theory would prefer a diversified portfolio 40% bonds to 60% Stocks and while this would have reduced a portfolio’s volatility it would not have reduced its risk.

Granted, Berkshire Hathaway is not your typical stock investment, and so may be a poor example for the purpose of this topic, but that does not change the fact that a large bond position is unlikely to reduce risk for the retired investor. It will certainly reduce a portfolio’s volatility, but whether it will improve the safety for the invested is a much more complicated question. And the answer to this question depends mostly on the quality of the investors equity investment, and the prevailing interest rates. The case for bonds is a lot better if interest rates are high enough to provide a return that will prevent the retiree from outliving her money.

The chart below compares the 25-year performance of the S&P 500 index with a moderately aggressive Vanguard Fund that holds a portfolio that is 60% invested in equities and 40% in bonds. As with most Vanguard funds the management fee is cheap. The Fund is described as follows;

“The fund seeks capital appreciation and a low to moderate level of current income. The fund invests in other Vanguard mutual funds according to a fixed formula that reflects an allocation of approximately 60% of the fund’s assets to common stocks and 40% to bonds. Its indirect bond holdings are a diversified mix of short-, intermediate-, and long-term U.S. government, U.S. agency, and investment-grade U.S. corporate bonds; mortgage-backed and asset-backed securities; and government, agency, corporate, and secularized investment-grade foreign bonds issued in currencies other than the U.S. dollar”

This chart clearly shows the advantage and disadvantages of the Modern Portfolio Theory, and its recommendation of a 60% to 40% Stock to Bonds as the gold standard for retired investors. 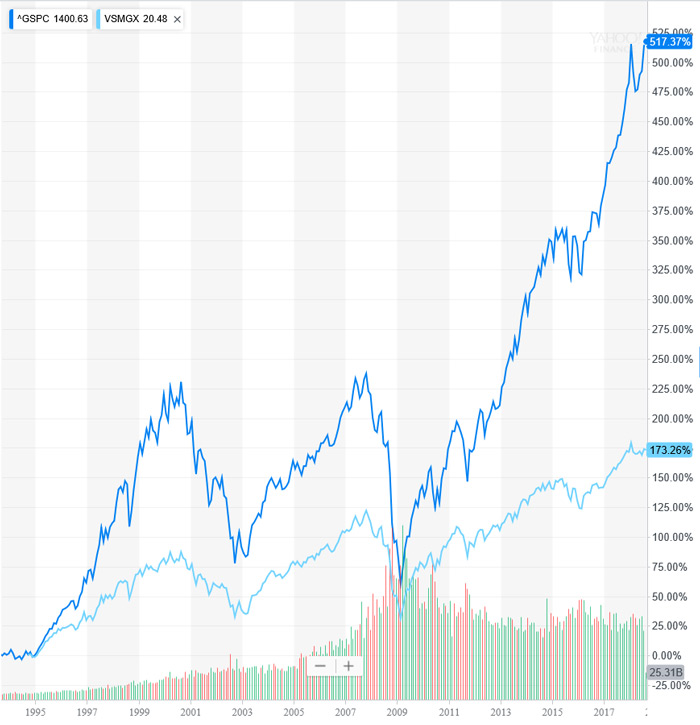 The chart does an excellent job of demonstrating why Warren Buffett prefers Equities over bonds. The bond position moderately smooths out the volatility that the equities experienced in the Tech Bubble in 2000 and the Financial Crisis in 2008. But in the long term the investor pays a steep price for this illusion of safety. What little comfort the investor receives from the small reduction in volatility simply is in no way adequate compensation for the reduction of capital appreciation in the an individual’s investments that result from the inclusion or the large bond position.

This point is driven home by the fact that this particular twenty-five years included two very bad periods for the equity markets a 46% correction in 2000-2001 for the Tech Bubble, and a fifty plus correction in 2008-2009 thanks to the Financial Crisis. If there ever was a time when a 40% bond position would have improve your financial results it was the last twenty-five years. These two massive bear markets represent a time when you would expect the bond position would have demonstrated their maximum benefit, yet in both cases within a year or two of either crisis, the all equity portfolio demonstrated superior results.

In this example the equities provided three times as much capital appreciation as the 60% – 40% portfolio for the twenty-five year period. For many retirees that capital appreciation might very well have meant the difference between out-living their money, and a long comfortable retirement.

A carefully selected equity portfolio can leave the investor with a good deal more savings at 90 than he had at 65. Certainly, this stock selection is no an easy task. This explains why so many large money management firms have no confidence in their ability to do this, and this is why they use the doctrine taught by Modern Portfolio Theory as a cover for their lack of skill, or the anchor provided by their size.