Triumph Group Inc. is a broad based federation of highly specialized suppliers to the aerospace industry. In the last 15 years Triumph Group Inc. has increased its annual revenue from $250 million to $3.7 billion. The bulk of Triumph Group Inc.’s revenues comes from programs that manufacture planes built for commercial airlines and executive jets. This makes it a way to invest in the rapid growth of the middle class in the rest of the world without ever leaving the United States.

Airlines from U.S. and other developed markets are growing slowly, so most of the orders for new planes over the next twenty years will come from rapidly growing airlines in Asia, South America and Africa. Whether or not any of these airlines will ever make a profit is always an open question, but as more and more customers want to travel someone is going to buy airplanes and most of Triumph Group Inc.’s products will eventually end up in planes being flown outside of the U.S.

The Triumph Group Inc.’s largest customer is Boeing, but they have contracts for a couple of Airbus programs, with Lockheed Martin, General Dynamics, Gulfstream and Northrop Grumman. They also are working with Bombardier of Canada and Embraer of Brazil on large programs that are in development.

Much of the Triumph Group Inc.’s consistent 18.7% annual growth in earnings for the last ten years has come through acquisitions. Their acquisition strategy consists of buying small companies (or divisions of larger entities) with highly specialized products in different segments of aerospace industry. Instead of integrating its acquisitions into one large entity with strong central control, they maintain a “Berkshire Hathaway” type structure by allowing each new operation to continue in semi-autonomous form within the larger existing structure.

The advantage of this kind of a larger structure with smaller operating units should be obvious to anyone who has followed Berkshire Hathaway. In keeping the operating units smaller, it encourages innovation, localizes decision making, and limits the damage from mistakes at one of the company’s units to the parent unit. Also this helps each of the operating companies to respond quickly to the needs of its individual customer.

The acquisition of Primus Composites brings the Airbus A 320 close to breaking into the top ten.

Overall, Boeing programs represent 45% of revenue, which is a bit heavy for one customer, but it is in many different programs. This concentration should ease once Bombardier’s 7000-8000 and Embraer’s E2 E-jet programs go into production. Company-wide, commercial aerospace contributed 57% of revenue in the first quarter, military sales 28% and business jets 12%.

On June 7, Triumph Group Inc. announced a $1.7 billion contract to design and build the center fuselage several tail sections for Embraer’s E2 E-jets. These are second generation regional jets with state-of-the-art engines, new aerodynamically advanced wings, and improvements in other systems that Embraer estimates will result in double-digit improvements in fuel burn, maintenance costs, emissions, and external noise. The first delivery of an E-Jets E2 aircraft (the E190-E2) is planned for 2018. Currently, 65 customers from 45 countries have added the current generation of Embraer E-Jets to their fleets.

Repair and overhaul of starter motor. 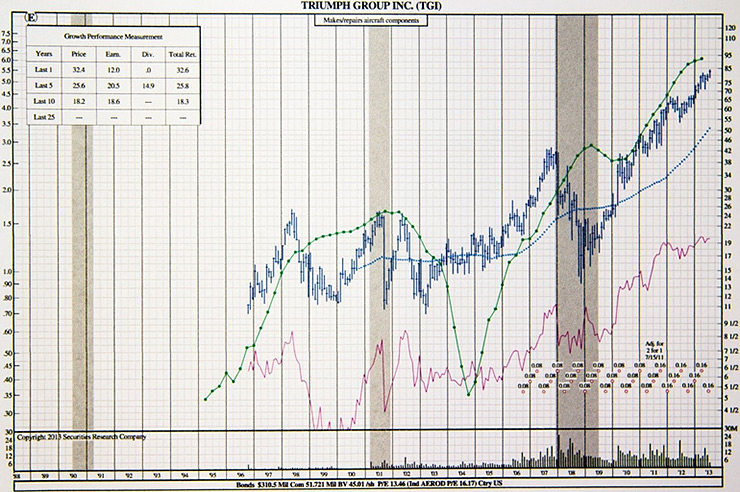