On September 10th I was in Los Angles, at The Daily Journal Annual Meeting, along with 250 other groupies who came from all over the country to listen for two hours to a 90 year old answer questions from the audience and expound on his philosophy of the stock market and just about everything else.

The 90-year-old was, of course, Charlie Munger, and the occasion was the 2014 annual meeting of the Daily Journal annual meeting. The Daily Journal is a small legal publisher and Software Company where Charlie is part owner and Chairman of the Board. Charlie has what some might call a magnificently jaded sense of humor and a very positive philosophy of life.

Charlie was not so much answering questions about financial markets as he was expanding on his philosophy of life, and to some extent the culture of Berkshire Hathaway. Charlie feels that making money beyond the point necessary to sustain a comfortable life style, adds very little to the quality of life. The pursuit of money beyond the point of reasonable comfort is mainly a product not of greed, but of “envy, the only one of the seven sins that is never fun”, he said at the Daily Journal annual meeting. 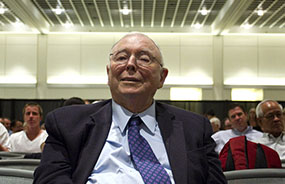 He feels that doing good means that you are contributing something to your society, and that improvement in the quality of life after you have reached a comfortable life style only comes from the satisfaction you get from adding something to your environment (the people around you – employees, shareholders, friends and family).

Some of the smartest people in the world today are just interested in making money. There are “quite a few professional poker players – “what the hell good are they doing for anybody?” A judgment Charlie extended to derivative traders and a large percentage of the population of lower Manhattan, but not to the attendees at the Daily Journal annual meeting.

It is easy to underestimate the impact that Munger and Buffett have had, and will continue to have on evolution of the market economy. When first I bought Berkshire in 1987 few people had heard of Warren Buffett and no one of Charlie Munger. Yet, today Buffett is a rock star, and Charlie has become a guru for serious money managers, and manage to attract an overflow crowd to each Daily Journal Annual Meeting.

Activities that are only designed to make money do not contribute anything to society, whereas skill in the proper allocation of capital generates growth of GNP, adds jobs and increases productivity. The increase in productivity is the engine that drives world-wide increase in living standards. This thought brought applause from the crowd at the Daily Journal annual meeting.

In a way the most satisfying aspect of Buffett and Munger’s success is their ethics. (You do not have to be a thief to get rich.) Or as Charlie said: “if all these crooks and promoters knew how much money there was in being honest, they’d all be in it” Charlie said at the Daily Journal annual meeting.