From the Chairman’s Letter:

“In 2004, our float cost us less than nothing, and I told you that we had a chance—absent a mega-catastrophe—of no-cost float in 2005. But we had the mega-cat, and as a specialist in that coverage, according to Berkshire Hathaway Annual Report 2006, Berkshire suffered hurricane losses of $3.4 billion. Nevertheless, our float was costless in 2005 because of the superb results we had in our other insurance activities, particularly at GEICO”.

In other words, according to Berkshire Hathaway Annual Report 2006, they just went through the worst hurricane season in history and still had an underwriting profit. How can that be bad?

So guided, according to Berkshire Hathaway Annual Report 2006, we’ve concluded that we should now write mega-cat policies only at prices far higher than prevailed last year – and then only with an aggregate exposure that would not cause us distress if shifts in some important variable produce far more costly storms in the near future.

Notice particularly the “far higher” in the above paragraph and dream a little about what will appear on Berkshire Hathaway’s bottom line if we have another year like 2002 and 2003 that were mega-cat free.

Few people on Wall Street, and apparently some of the resident heretics on this board, understand what a truly conservative animal Warren Buffett is. When he presents the Berkshire Hathaway Annual Report 2006, he tells us all the bad news and lets us will figure out the good news for ourselves.

In order to demonstrate this point I would like to present Berkshire Hathaway’s earnings 2005 as they would have been presented if Fred Futile (the guy who hires Ratchet, Ratchet and Bingo to set up his option agreement) was the CEO.

First of all we have all of these one time charges, like hurricane losses and currency losses. Sure they are loses, but they do not happen every year so Fred would want to do a proforma to show Wall Street what the numbers would have looked like if all those bad things had not happened.

So with a little accounting magic we have transformed Berkshire Hathaway’s Reported Earnings of $8,528 billion into a proforma of $11.573 billion or $7,519.81 per share.

This is the company’s operating earnings plus their share of the companies’ undistributed earnings whose common stock , according to Berkshire Hathaway Annual Report 2006 Berkshire owns. 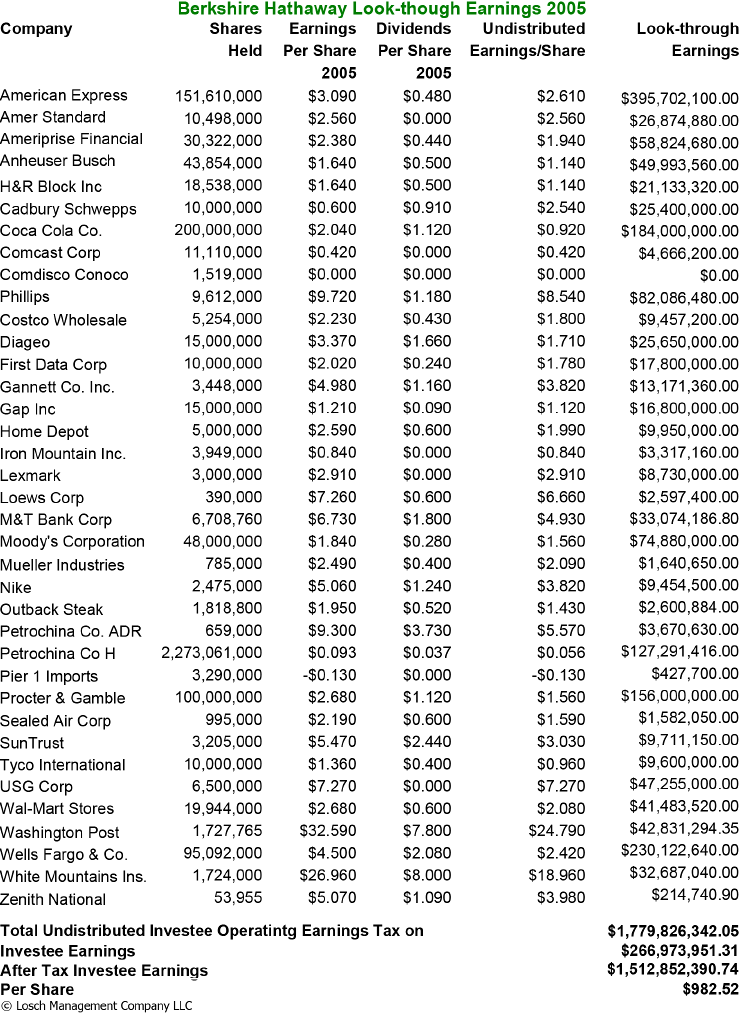 I have added Diageo to the list even though the only support I have for this position is an article from the US News – a source which is not necessarily that reliable. They claim Berkshire Hathaway filed a report with an insurance board showing a 15 million share holding of Diageo as of September 30, 2006. The problem is the article did not say what kind of shares. I am showing data for the ADR but after reading Warren Buffett’s letter, I would guess that if they own Diageo, they are holding the local (foreign) shares. From the Chairman’s Letter:

“We reduced our direct position in currencies somewhat during 2005. We partially offset this change, however, by purchasing equities whose prices are denominated in a variety of foreign currencies and that earn a large part of their profits internationally. Charlie and I prefer this method of acquiring non-dollar exposure.”

The Berkshire Hathaway annual report 2006 lists equity positions of $46.721 billion, whereas the total listed on the last 13F was $42.664 billion. The difference has to be stuff from the confidential list or securities that are not listed with SEC and are therefore not listed on the 13F. About $2 billion of this is Petrochina H shares which are foreign securities.

But if we assume that WESCO, which is listed on the 13F, is not included in the equity total in the Berkshire Hathaway annual report 2006 because it 80% owned and is therefore consolidated into Berkshire Hathaway’s assets and liabilities, then we still have $4+ billion in equities that are missing and unaccounted for. My guess it that most of this is the foreign equities that Warren Buffett is talking about above.

Some of these may have been around for a while, but according to Berkshire Hathaway Annual Report 2006, they purchased $1.7 billion of equities in the fourth quarter. About $500 of that appeared on the latest 13F (mostly Wells Fargo), but the remaining $1.2 billion could be part of Warren Buffett’s “non-dollar exposure”. Maybe this is more Diageo. It is perhaps some Korean steel. Who knows? This is something we are likely to find out only when Warren Buffett decides to tell us.

According to Berkshire Hathaway Annual Report 2006, investment wise it was a good year, as Warren Buffett managed to outspend his cash flow for the first time since 2002. Net equity investments totaled $6.4 billion, and acquisitions totaled $7.5 billion if you include PacifiCorp, which will not close until this year.