As I am wandering the aisles of the enormous trade show at the Singapore Airshow, I stop by the Florida Pavilion, just for a touch of something familiar. I start a conversation with a man in the booth of Future Metals, a company with headquarters in Tamarac, Florida. The Company appears to occupy an interesting niche in the aerospace business. They manufacture aircraft grade tubing and bar stock made of aluminum, stainless steel and titanium, as well as bars made from alloys of aluminum, nickel, bronze, beryllium and copper in many shapes and sizes.

Future Metals sells these products to aircraft manufacturing companies, maintenance organizations and aircraft modification centers through seven distribution centers in the United States and four international locations, including an office in Singapore.

I like the aerospace business because an American company that is a supplier to Boeing or Airbus is selling to the global market, whether that company has any international presence or not. Sooner or later, most of what it is selling is going to end up somewhere other than the domestic market. Even if the plane is sold to an American carrier, most of the big American airlines serve the international markets. The Boeing 767, 777 and 787 are mostly used on international flights, as are the Airbus A330, A350, and A380. 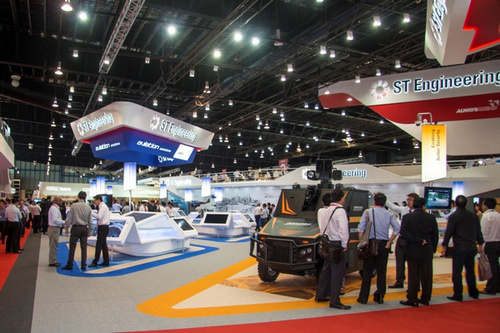 I am in Singapore because I have read that in the next twenty years, over a third of all the commercial airliners delivered worldwide will be delivered to Asia. Airbus has estimated that in those twenty years Asian customers will purchase 29,200 passenger and freighter aircraft.

Expecting the same answer that I get from most other small, good looking companies booths where I have stopped at this show, I ask The Future Metals rep if his company is public and get the expected “no” but then to my surprise he goes on explain his company is owned by Berkshire Hathaway. I am somewhat taken aback by this piece of news, but it is good news (I do not have think about buying the company’s stock because I already own it).

Having owned and followed Berkshire for many years, I thought I knew all significant subsidiaries, but the rep went on to explain that Future Metals was part of the Marmon Holdings Inc. The fact is we know little about Marmon except that they own many companies, and that those companies have done well since the acquisition in 2008.

But, it was nice to find this small part of Berkshire in what is certainly a growth industry, with a strong presence in international markets; it makes you wonder how many other nice little surprises there are out there in that Marmon basket.

The Singapore show was a great education demonstrating that commercial aerospace is a huge industry with thousands of moving pieces. While Boeing and Airbus and other large aerospace companies are too big, and their margins too small, for me to be interested in them, they have hundreds of suppliers, some with very nice margins. While many of the best of these suppliers are privately held, there are a number of public companies in the small and mid-cap range with the ability to sustain moderate growth for a period of many years because of the backlogs at Airbus and Boeing.

I learned from the people at Future Metals was that MRO (maintenance, repair and overhaul) generally generates better margins than supplying OEMs (original equipment manufacturers). Companies may in fact be willing to sell parts to OEMs at little more that cost, figuring that once their part is on the airplane it may be replaced several times over the twenty to thirty year useful life. So, the MRO market may be much bigger than the cost of the original part sold to Boeing, Airbus, Bombardier, Pratt Whitney, Rolls Royce, or GE.

Singapore is an important location for companies doing MRO business in Asia. Singapore has very stable government with a strong tradition of “the rule of law” from its history as a British colony, and a government that tries hard to create a favorable business climate. Geographically, Singapore is centrally located between all the big Asian population centers, and Singapore has access to cheap labor from Indonesia, Malaysia and the Philippines.

An important part of the MRO sector involves supply chain management. If an airline has a 747 that is sitting on the ground somewhere in China in need of a part, the ability to get that part to the required location as quickly as possible is a critically important skill, and is one that the airline will pay well for. AAR claims to be one of the world’s biggest providers of this service. However their financial statements are not satisfactory. To learn more about this sector, in April I will be on our way to Phoenix for “MRO America”.