Last investment year, something in excess of 60% of Breakwater Resources’s revenue was from zinc, and 2006 was a good year for zinc. Most of the world’s production of zinc is used in the fabrication of galvanized steel. This steel is used mostly for new building construction and by automotive industry, and China has become the largest consumer.

In 1990 China used 8% of the worlds zinc production, by 2003 that figure had grown to 21%, and in 2005 China used 27% of the worlds zinc. Today China uses about 2.6 times as much zinc as the United States which is interesting, and probably means that the direction of the U.S. economy is not as important to world commodity prices as the direction of the Chinese economy. This is a rather rapid increase in appetite, and unless something happens to slow down China’s economy the zinc market may stay tight for a while. 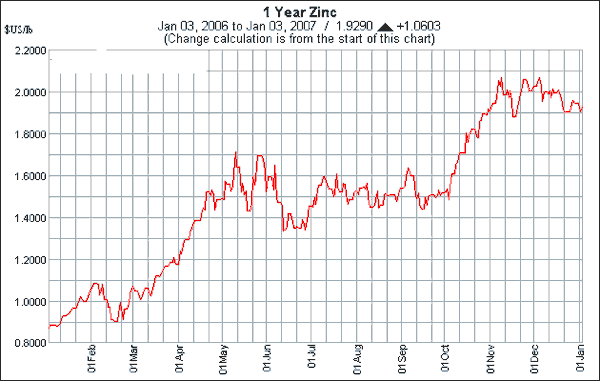 In 2004 Breakwater Resources’s total net was a little over $13 million. In 2005 it was 18.2 million. This investment year with the price of the zinc gone ballistic the company earned 40.7 million in the third quarter, and $109 million for the first nine months of 2006 (all of the above figures are in Canadian dollars). With the price of zinc up again in the fourth quarter (see chart). The Breakwater Resources could earn $170 million for the year.

For a company with a total market capitalization of $540 million this means Breakwater Resources is selling at less than four times last year’s earnings. All commodities are cyclical, and the price of zinc can go down as fast as it went up. For years, zinc was selling for $.30 to $.40 a pound and there was a surplus of the metal on the market. Market prices provided little or no profit for the producers of the metal, so there was no capital for expansion, and unprofitable mines were taken out of production, but as it always must be, now the cycle has turned and suddenly the surplus has disappeared, now the world is using zinc faster than it is being produced.

Clearly prices will not stay at these levels forever (commodity prices never do) but the correction will not happen overnight. And an argument can be made that with the growth of China, India and Brazil commodities may not permanently return to level we saw in the 1980’ and 1990’s. If prices just stay were they are today Breakwater Resources could earn $220 million in 2007. On the other hand, if they do not stay the same (much more likely) each $.01 move in the price of zinc will add to, or subtract $1.8 million from the company’s bottom line.

Mines are nasty and not good for the environment. So there is a lot of political resistance to the opening of new production sites. This tends to delay the return to lower prices, and the turning of the present up cycle may require time and a good deal of capital. In the meantime Breakwater Resources is rapidly accumulating cash. Breakwater Resources had $65 million in cash on the books at the end of the third quarter, and that total should show substantial increase when the fourth quarter results are released the first week in March.

What the Breakwater Resources’s management will do with that cash remains to be seen. They have run a pretty tight operation up to this point. They survived the low prices of the early 2000’s with little debt and with a cost of production that left them marginally profitable most of the time. However, big piles of cash have been known to produce all manner of bad management behavior. If the cash is used for activities that are shareholder friendly this may be an interesting holding, if not we will vote with our feet.

Breakwater Resources also owns base metal and gold exploration properties in Canada, Honduras, Tunisia and Chile. It is developing its Langlois mine located in Lebel-Sur-Quevillon, Quebec with commercial production expected by this summer.