The trend to passive investing (investing in an index funds or ETFs based on an index such as the S&P 500) has accelerated in the last to few years to the point where we have to wonder how much longer this trend can go on. Last year, American investors plowed a record $504.8 billion into passive investing, while pulling $264 billion out of actively managed funds focusing on US companies. In addition, more than $100 billion in cash left actively managed hedge funds in 2016. The current trend started in 2006. It has been going on for a long time. It has been accelerating as the market recovered from the banking crisis. See Chart below. 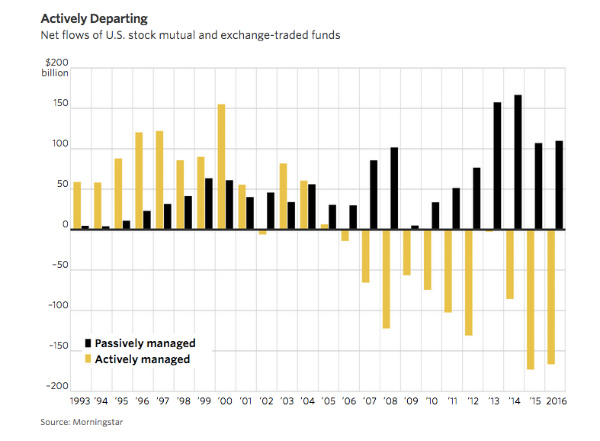 The main driver of this massive flow of cash is the fact that over the 10-year stretch that ended in 2015, a mind-boggling 82% of actively managed large-cap funds and 88% of small- and midcap funds lagged their benchmark indexes, according to S&P 500 Dow Jones Indexes.

The trend to passive investing is especially pronounced in the United States, where 18% ($4.8 trillion) of the industry’s $27 trillion in equity assets are currently invested in passive investing, up from just 13% in 2008, according to data from market research firm Morningstar. Crucially, however, this statistic largely understates the real impact of passive investing because it does not account for the impact of closest indexes.

Closest indexes are large companies who manage mutual funds, or large retail brokerages that direct the investments for their retail customers, whose size makes it impossible to out-perform the indexes. If you are managing large sums of money (in excess of $100 billion) it is dangerous to take concentrated positions because you move the market getting in and out. As a result, in a bad market, if you want to sell, you take a large haircut. Outperformance requires concentrated positions, so if you manage many billions it may be not possible to get out of a bad position when negative events present themselves.

Even a single instance of getting stuck in a market going bad because of unexpected events can ruin your record for years, so large managers protect them self by broad diversification with portfolios that will mimic the index. Instead of trying to out-perform the large money managers shoot for modest under-performance.

The S&P 500 index, currently the index that is the most frequent benchmark of the popular index funds, is a weighted index. For that reason, most of the money flowing into these indexes is being used, directly or indirectly, to purchase the stock of the largest 50 to 100 U.S. companies.

Warren Buffett pointed out at a recent Berkshire Annual Meeting that the 5 largest companies in the S&P 500 account for 10% of the total capitalization of the S&P 500, and the that these companies are already generate more cash than they can profitably use for expansion. Passive investing is a very poor device for the allocation of capital because in this instance Warren’s example alone 10% of the money that is invested is going to companies that do not need it.

These purchases by the index funds channel money into these stocks because they are large, and because they are in the index, with no regard to the company’s intrinsic value or to future prospects. So, as the flow of money into indexing becomes larger and larger, it distorts the value of publicly traded stocks. There is a tendency for money to flow to more mature and generally less dynamic companies, or to companies like Apple and Berkshire which have more cash than they know what to do with.

Money flowing into these stocks will have not much economic impact for these companies or the economy. Many small-cap or mid-cap companies that are not in the S&P 500 Index could use this capital (through stock offerings) more effectivity to raise employment and expand their business will find that it is more difficult to raise the capital that they need to expand.

This disruption becomes larger and larger as more money is directed to passive investing. Evidence of the acceleration this trend is seen in Chart below. The percentage of actively managed funds that have outperformed the Vanguard 500 fund in last five years has fallen to about half the percentage of this performance for 20 and 25 years. 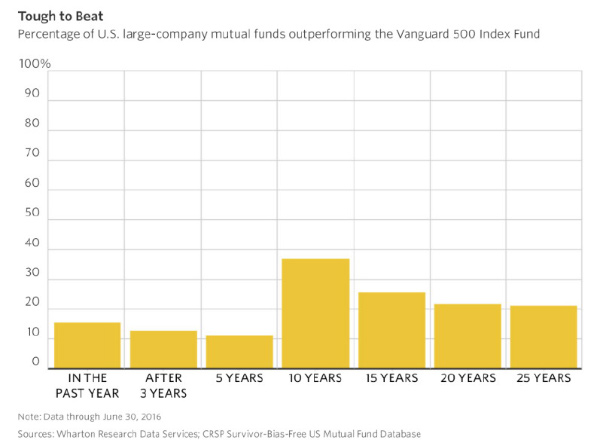 It certainly will not come as a shock that the last five years have been a poor period for active financial managers, but the extent by which the last 5 years’ performance has trailed the long-term figures, commands attention.

So, have active managers recently turned more stupid or is it possible the flow of funds into passive investing is making life more difficult for stock pickers as it penalizes the performance of companies that might be attractive to value investors? While the financial media and the and indexing industry are eager to sell the concept of passive investing, a look at the longer-term figures in Chart above, suggests that rather than indexing being the result of this monumentally poor relative performance of active management, it might well be the cause.

With frictional costs such as they are, and the fact that relative performance is a zero-sum game (the stock market is not Lake Woebegon were everyone is above average) it does not seem likely that the figure for managed funds will ever be able to get much better than the low twenties.

However, managed fund performance could grow closer to the long-term figures. The fact that the percentage of outperformance increased from the 25 years’ figure of about 21% to about 25% in the 15 year figures may be explained by the fact that there has been a steady decline in frictional costs.

It is our contention here that the present trend with not go on forever. Distortions in the market present opportunities. Many small and mid-cap non-index companies are already quite cheap compared to large-cap. At some point this imbalance will become overwhelming. Companies not participating in the index boom will start to attract capital, and value investors relative performance will then improve.

While the large money managers will never be able to beat the market (you can’t beat the market if you are the market), the performance of managed funds could well revert closer to the long-term figures, and some managers managing smaller sums could do quite well for a long period.

So, there may be hope for the future, and stock pickers may be able to take some comfort from the fact that performance in the past year has improved significantly from the 5-year figure.

John Bogle in a recent interview was asked how far the trend to passive investing could go without having a negative effect on the market. Bogle was dismissive and said he thought that passive investing could get much larger without distorting market valuations. On a surface 18% share of the overall market equity capitalization doesn’t seem to be enough to throw the markets out of balance.

But this 18% figure massively understates the influence of the index funds. The impact of the S&P 500 index is much larger if you add in the amount of managed money that is forced into closet indexing. Many large funds that are classified as managed, and charge a substantial management fee, mimic the indexes by holding a broad portfolio of the same stocks contained in the index.

In fact, any world class brokerage, bank, or management company manages too much money to even dream of out-performance. Due to the virtual impossibility of outperforming the index, they do not really try. Size is an anchor to performance. Why? Consider that a 5% position for a concentrated $200 billion portfolio would amount to $10 billion. If the portfolio manager would buy no more than 10% of a company’s stock, then the manager must find twenty, underpriced $10 billion positions out of a universe of companies with a market cap over $100 billion.

In the US there are about 50 such companies, which -not coincidentally- comprise about 40% of the S&P 500 market cap. Looking internationally adds another 35 such companies to this sparsely populated universe. With these numbers, the probability of large fund managers outperforming becomes, to mix metaphors, astronomically small.

Table 1 is a list of the top 50 money managers in 2015. All of these managers with asset under management in excess $200 billion so it is not possible for any of them to outperform the S&P 500 over any substantial period of time. Realistically they likely to perform some form of closest indexing whether they admit it or not. The $26 trillion included in this list obviously includes some fixed income investments, but estimating 60% invested in equities would mean $15 trillion of this money is invested common stocks.

By comparison the Towers Watson global 500 estimates about 20 trillion in U.S. equity investments are managed by large professional managers. Instead of passive investing establishing the valuation for 18% of the equity market the total is maybe closer to 90%, and any further trend toward indexing will drain the last remaining droplet of liquidity from the stocks of those smaller companies not included in the most popular indexes.

Closet Indexing does not mean that the manger or fund will try to exactly duplicate the positions held by and index fund which maybe some do, but it is more likely that the manager will hold a large number of companies that are in the popular indexes with an emphasis on the large capitalization companies that dominate the index. In this manner, it is possible to construct a portfolio that will track the index closely. This is a much safer path than trying to beat the index.

As the influence of indexing becomes more pervasive it diminishes the incentive for the individual to out-perform. It not hard to find examples of this distortion, with large American Companies that are in the S&P 500 the is little relationship between the company’s potential for future growth and its current market valuation, and many small companies with decent long term potential are very cheap.

As passive investing has become more popular life becomes more difficult for active managers. While it is a mathematical certainly that the average manager will underperform the average after fees, the job of the stock picker has become more difficult in recent years as more funds have flowed to indexing, which in effect deceases the value of finding well managed companies at a reasonable price. The trend becomes self-re-enforcing as the flow of funds encourages more managers to forego stock picking.

This in a period where frictional costs (management fees, trading commissions and the spread between the bid and asked prices) have been rapidly decreasing so the value of active management (not passive investing) should be increasing.

In financial markets all trends are transitory, what is popular today rarely stays popular for very long, yet the trend to indexing has been going on for several years and is beginning to generate substantial distortions in the value of the underlying stocks.

What goes up will eventually go down. Certainly, there are positive aspects in passive investing, but with capitalism there is never too much of a good thing until it becomes a bad thing.

So, we are left to wonder how long the money will continue to flow predominantly to passive investing, and speculate on the impact on the market when the trend does reverse. If you use the magazine headline indicator, then certainly we are at peak passive investing,” said Nick Colas, chief market strategist at Convergex. “Everyone has chiseled out the tombstone for active management.”

The day of the stock picker may return. Crowded markets rarely work out for investors following the trend. As John Kenneth Galbraith’s once said, “In economics, the majority is always wrong,” we wait until the market reveals how wrong, and for how long.