Fluor corporation is the construction and engineering company

Fluor corporation is the largest construction and engineering company in the United States. It has offices in 25 countries with major operations in Canada, Middle East and Australia. Many people believe that the shale oil revolution will be the engine for the revival of manufacturing in the United States. To some extent this is already happening, with a number of huge petrochemical facilities already under construction along the Gulf Coast, and more being planned. These are complex multi – billion dollar projects, and somebody has to build them. Flour is one of a handful of companies world-wide with the capability to provide a full range of construction related activities, (design, engineering, procurement, construction, maintenance, and project management services) for these facilities.

Fluor corporation is a holding company whose major operations are divided into five primary business groups. 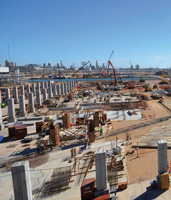 In the second quarter of 2014, 53% of the company’s revenue, and 54% of its profit, came from this sector. Oil & Gas designs and builds some of the world’s largest and most complex energy and petrochemical projects in remote and challenging locations around the globe. The group provides engineering, procurement, construction and construction management services for processing plants, refineries, pipelines, offshore facilities and other energy assets.

“Gas production is driving major projects right now in the United States, and we see this as a precursor to opportunities worldwide. As shale gas extraction technologies become more mature, we also expect a steady ramp-up of gas development internationally, first just across our borders in Canada and Mexico, and then other countries in Latin America, Europe and China.”

Although Energy and Chemicals will likely be the main driver of Flour’s growth for the next five years, Infrastructure, even though flat for the past few years, should experience growth going forward as we begin to replace our aging infrastructure in the United States and Western Europe and as middle class growth in India and The Asia Pacific require new construction.

In 2013, Fluor corporation completed the seven year construction of the San Francisco Oakland Bay Bridge. This is the largest self-anchored suspension bridge in the world, and the largest public infrastructure project in California history.

Recent contract awards include the Tappan Zee Hudson River bridge project in New York and the Horseshoe project in Dallas, an $800 million highway interchange that will streamline what is considered one of the most congested roadways in the United States. Fluor corporation also won the program management and construction supervision contract for the ambitious Doha Bay Sharq Crossing project in Qatar, as well as the project management contract for a major railway expansion in Saudi Arabia. Bidding activity for infrastructure projects picked up significantly in 2013, and several of these projects are expected to be awarded in 2014.

In the second quarter of this year, 28% of Fluor corporation’s revenue, and 31% of its profit, came from this sector. Industrial & Infrastructure delivers projects that are the building blocks of today’s urbanized world. The group serves the mining and metals, highway and rail transit, heavy civil, manufacturing and life sciences industries worldwide. They build bridges and highways, manufacturing facilities, mining infrastructure and wind farms.

While this business group continues to suffer from the drawdown for logistical support for our troop in Afghanistan, it continues to perform ongoing nuclear remediation work at Savannah River in South Carolina, and at the Portsmouth Gaseous Diffusion Plant in Ohio. Through these long-term contracts and others, Fluor corporation is a tier-one provider in nuclear remediation. In 2013, they were selected to operate and maintain the country’s Strategic Petroleum Reserve.

In the second quarter of this year 12% of Fluor corporation’s revenue, and 4% of its profit, came from this sector. Fluor corporation’s Government group partners with a number of U.S. government agencies, including the Departments of Defense, Energy, Labor, Homeland Security and the national security, to help them operate more effectively and efficiently. The group provides logistics services, base and facilities operations and maintenance, contingency response, and environmental and nuclear services.

In the second quarter of this year, 3% of Fluor corporation’s revenue, and 6% of its profit came from this sector. Global Services provides a wide array of solutions to support projects across Fluor corporation’s groups and to help clients optimize their performance in locations all over the world. The group offers construction resources, industrial fleet and equipment services, supply chain solutions, fabrication and modularization services, and temporary professional staffing. Separate teams of experts, procurement staff, project managers and workers are provided for large projects that are supported by a centralized administrative staff. These services can also include equipment rentals, construction support, staffing, training and certification. 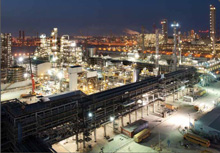 In the second quarter of this year, 4% of Fluor corporation’s revenue and 5% of its profit came from this sector. Power designs, builds, commissions, retrofits and maintains facilities across all fuel types and technologies, including fossil fuels, renewables and nuclear, and is an expert in environmental compliance and emissions retrofit work.

Heavy commercial construction is, and always we be, a cyclical business and heavily dependent on growth in the global economy. Fluor corporation’s stock, as with other companies in this sector, will be volatile. Fluor corporation’s long term record has been good, with earnings growth of 13% per year for the last ten years. But, because of the cyclic nature of this business, in order enjoy a decent return, the investor will have to be patient enough to hold on during the down cycles.