Berkshire Hathaway is the largest shareholder of Chicago Bridge and Iron, currently holding 9.8% of the company’s outstanding stock. As you can probably tell from the name, the company has been around for a long time. It was founded in 1889, but currently bears little resemblance to the original business.

Chicago Bridge and Iron is neither located in Chicago, having moved to Houston in 1997, nor do they build bridges anymore. Currently it concentrates on building large complicated structures for the gas and energy business and in fabricating steel pipe. It is estimated that the company’s revenue will run in excess of $12.5 billion this year, with profit approaching $500 million, up substantially from 2009, when its revenue was $4.6 billion and its profit was $180 million.

The company has been an aggressive acquirer for the last ten years and has compiled one of the best records for consistent profit growth of any engineering and construction company in chemicals, petrochemicals and energy. 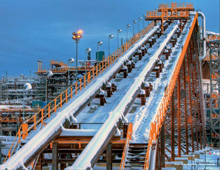 The Company’s stock reached a high of $88 in May on the strength of consistent and strong earnings grown for the last five years. While this record would seem to set Chicago Bridge and Iron apart from much of its competition, the company can’t seem to avoid problems.

The stock did rally nicely in August, after Berkshire announced that it had increased its position in the second quarter, but it has been selling off sharply as crude oil prices hit new lows. Crude oil prices have been declining since the beginning of this summer, and that decline has accelerated recently. As oil prices decline, oil producers’ profit margins decline, pressuring those producers to postpone construction of new production facilities, and refineries.

Chicago Bridge and Iron does some business related to oil production (steel pipe and containment vessels for refineries), but most of their new contracts are related to the production of natural gas and petrochemical facilities in this country and internationally. In the third quarter of this year, Chicago Bridge and Iron announced contract awards in these businesses in Malaysia, Algeria, China, Poland and several other counties, in addition to seven new contracts projects in the United States.

Chicago Bridge and Iron backlogs are at record levels and have been increasing nicely this year because of construction related to the cheap natural gas in this country. Recent news releases indicate there may be a sharp bump in new contracts in third quarter. The news releases do not give the size of the contacts and Chicago Bridge and Iron’s current operation come from hundreds of contracts that can vary in size $100,000 to $2 – $3 billion, so we will not know the real number for new business and current backlog until the third quarter 10q is released in a couple of weeks.

While oil prices will definitely bring a halt to projects related new Oil field Production, the impact should be more selective with petrochemical and LNG facilities. Chicago Bridge and Iron is very strong in LNG (natural gas that has been cooled till it becomes a liquid) export and import facility construction, and this area is where a lot of their new business is coming from.

As new export facilities are built here, it will encourage domestic producers to keep drilling, which will keep downward pressure on prices here. With natural gas prices in the U.S. at half of what they are in Europe, and a third of what they are in Asia, this price difference increases the potential, not just for the export of natural gas, but also the export of its byproducts. 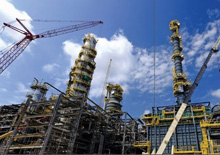 Natural gas is mostly methane, but before it can be used for fuel, its byproducts must be separated. The largest byproduct is ethane, and ethane is used to make the feed stocks that are used to manufacture plastics. The biggest energy related construction projects recently announced in the United States include several huge three billion dollar ethane crackers being built on our Gulf Coast. These facilities will allow for export of petrochemical feed stocks, at very competitive prices, to Europe and Asia, where they can used in the manufacture of plastics.

Plastics producers in these locations may well have to import ethylene from US to survive. These ethane projects have proceeded much more rapidly in this country than the liquid natural gas export facilities because they lack the political sensitivity of exporting natural gas. However, toward the end of 2014, several LNG export facilities were approved by the Obama Administration. The competitive advantage in these products currently enjoyed by the United States should not be directly affected by the fall in the price of crude oil.

These ethane projects probably have something to do with the third quarter spurt in our GDP. Chicago Bridge and Iron builds containment vessels for these projects, and it has a division that fabricates the pipes that connect everything together inside these huge hundred acre facilities, connect the natural gas production to the crackers, and connect the crackers to the port for export.

While the near term for Chicago Bridge and Iron may be a little murky because of the sluggish world economy and falling oil prices, long term prospects appear promising, I can understand why Berkshire is adding to its position. The stock is down from a high $88 in March and to $54 today. With the stock expected to earn over five dollars this year and the potential of long term double digit growth, there appears to be a nice margin of safety. Chicago Bridge and Iron has affirmed their earnings estimate of $5+ for the year ending December 2014.

There is a chance Chicago Bridge and Iron will bounce after the first of the year once tax selling abates. It appears that the tax selling has been stronger than usual in 2014 because of large capital gains taxes being faced by many institutional investors, and the tendency to harvest some losses to minimize the tax penalty. Those stocks that are down for the year have been particularly weak last month. Tax selling is clearly not the only problem driving Chicago Bridge and Iron down, there are the fundamental problems facing energy related stocks caused by the rapid drop in the price of crude oil.

Clearly, a list of this year’s projects may not best the best reflection of the company’s total book of business, but that is what we have, so let’s look at it. Out of the 40 projects listed, there were only three that involved crude oil in any direct sense. These include two small projects for storage of crude oil and one project for gas field development in Algeria, which may or may not be impacted by oil prices. In this year’s contracts there is no business related to crude oil production, either off-shore or shale oil.

Two Chicago Bridge and Iron contracts involve construction of gas fired power plants in this country, and I do not see that oil prices would affect these contracts. There are five contracts related of refinery construction or modification, but falling crude prices are basically good for refiners, unless they are part of integrated operation, because it lowers their costs faster than their income.

Four other contracts relate to mitigating the impact of energy production on the environment – a good business to be in no matter what oil prices do.

There were three new contracts related construction and maintenance of nuclear power, one area where there may be problems. The Company held an investor day November 11, and in answer to a question with regard to the potential for more write offs from their large nuclear projects, the CEO was a little vague, but at the end of this meeting, the company confirmed their earnings guidance for 2015 of $6.05 per share. 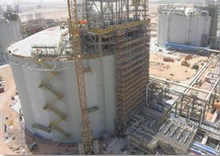 The great bulk of new business in 2014 is in the area liquefied natural gas (LNG) export (5 contracts) and Petrochemical construction and engineering (17 contacts). LNG business will be negatively impacted only if natural gas decline in Europe and Asia more than they do here. The huge growth of the petrochemical industry in this country has been based on a competitive advantage from cheap natural gas here. Plastic feed stocks can also be refined from crude oil so there may be some lessoning of this competitive advantage, but it is likely that as the feed stock prices decline plastic end products will become cheaper and more competitive with traditional materials.

It will be a while before it is clear what impact lower Crude prices will have on Chicago Bridge and Iron’s bottom line, but is unlikely that growth in the petrochemical business will come to a halt due to lower oil prices. The cost of the feedstock and the energy used in production amount 80% of the cost of producing the resins that are used making plastics. A fact that is likely to give this country a very strong competitive advantage for many years.

Cheap oil will be of most benefit to the economies of Asia and Europe, and savings from the price decline may well lead to an increase in spending on traditional infrastructure projects in these areas, which will help Chicago Bridge and Iron generate new contacts unrelated to the energy business.

From this information I do not see a justification for the 60% price decline from February, and at 7 times 2014 estimated earnings, there seem to be a substantial margin of safety for investing in Chicago Bridge and Iron. 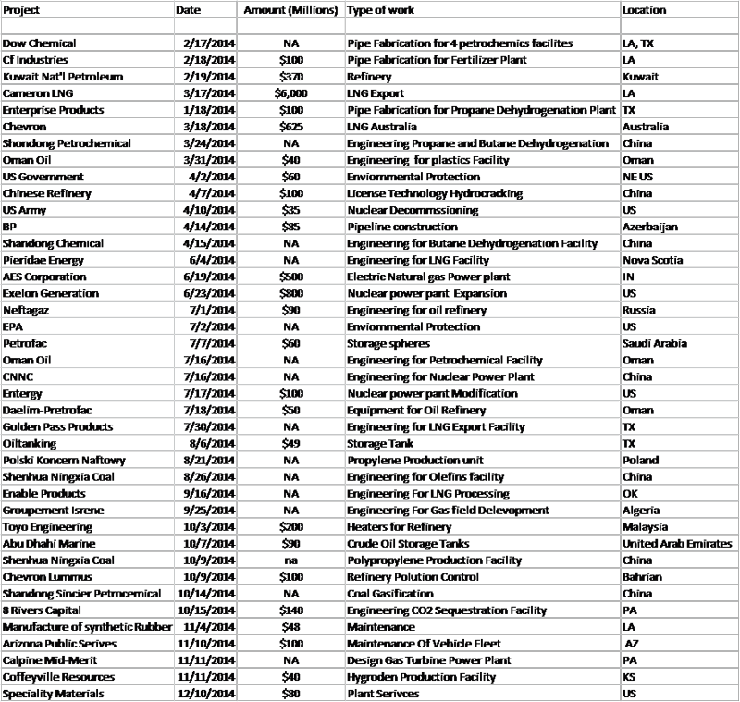