The Global Plastics Summit by IHS

The Global Plastics Summit was produced by IHS and presented in Chicago at the Radisson Blue from September 27 to September 30, 2016. After declining for the last thirty years, the domestic petrochemical industry is experiencing new life thanks to the shale revolution. This turn-around is in its early innings – low gas prices and long-term recovery of crude oil will put this country in a very strong competitive position relative to Asia and Europe in many basic chemicals.

Nariman Behravest IHS’s chief economist spoke about basic economic problems and potentials he sees in today’s world. In the US, he is worried about Donald Trump’s protectionist rhetoric. Trump’s proposal for imposition of a 24% tariff on goods from China would likely lead to retaliation by China, Asia, and the rest of the world which would cause serious damage to chemical industry and the American consumer.

In Europe, he fears the negative impact of Brexit including the uncertainty it would add to future trade deals with the EU. Further, he foresees possible increased anti-EU and right-wing nationalist movements across the bloc, inhibiting investing, damaging consumer and business confidence, and increasing market volatility. 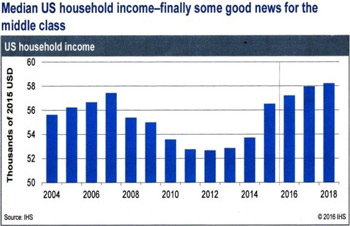 One positive trend in this country that has not yet been acknowledged by the politicians or the press is the recent return of growth in the median household income. This trend is predicted to continue at least through 2018, with encouraging long term implications. 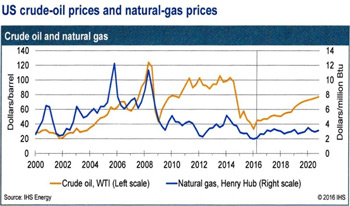 Global Plastics Summit IHS predicts that world crude oil demand will increase by 1.3 Million barrels a day per year in 2016 and 2017, and that the current inventory builds will turn around by the 4th quarter of this year, with the result that the price of crude will trade in the low $50 range in 2017 and the high $50’s in 2018. Long term recovery is expected to extend to the $80-$90 range by 2021.

With demand for gasoline decreasing in North America, most of the growth will come from Asia Pacific, the Mideast and North Africa. The chart shows the effect of fracking on the price of natural gas in this country from a high of about $12 in 2006-2008 to $2.00 today. For the future, it estimated that the price will stay around $3.00 to $3.50 for quite a few years because of plentiful supplies from fracking, in sharp contrast to price of crude oil, which is expected to at least double from it low earlier this year by 2018.

Shale now gives the US a price advantage over most of the rest of the world in some petrochemical products such as Polyethylene resins. That advantage is expected to last a long time, and should increase as the price of crude oil recovers. This is the basis for what is expected to be a rapid expansion in the petrochemical business in the United States. The price varies based on the item to be shipped, the cost of the feed stock used, and transportation cost. Over the next five years, one of our most competitive products with the highest volume of exports will likely be polyethylene resins because they are easy make and cheap to ship.

The chemical business last year generated a trade surplus of $7.1 billion. Most of this surplus comes from the resins that we supply to Asia and South America, where these resins are turned to hundreds of different kinds of finished plastic products. This trade balance is likely to increase substantially in late 2017 and 2018 when $120 Billion in new production facilities come online in this country. Most of these facilities are located on the US gulf coast and are the direct result of the unconventional gas production revolution. 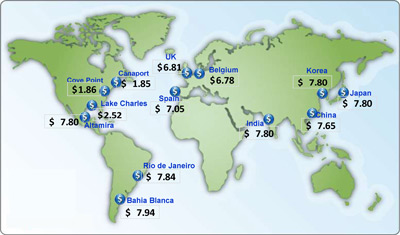 Natural Gas is cheap to ship domestically (through pipelines), but expensive to ship internationally because it has to be liquefied and pressurized. Nevertheless, there several big, expensive projects under construct to liquefy the gas for special ships, which are being built to carry the liquefied natural gas (LNG), and contracts have been signed for future deliveries mostly in Europe, Asia, and South America. (The map above shows gas prices world-wide).

Domestically, the cheap natural gas boosts our economy by lowering our energy cost. As a result, petrochemical business enjoys a unique form of double-dipping in cost savings: after feedstock itself, the largest single cost of producing Petrochemical is the cost of energy.

Most gas produced is methane, used domestically for heating and generating electricity, but before the methane (Natural Gas) can be used for these purposes, the other olefins (ethane propane and butane) must be separated. The most important of these is ethane; about 4%-10% of the gas as it comes out the ground and it is the largest factor in America’s Petrochemical rebirth.

As a byproduct of natural gas production, ethane now produced in the United States has changed from being the most expensive in the World to what should be, by the end of next year, almost the cheapest.

Ethane while expensive to ship is not as expensive to ship as LNG, and the US began shipping ethane to European crackers this year. The first U.S. ethane export terminal, located in Marcus Hook, Pennsylvania, with an export capacity of 35,000 barrels per day (b/d), began shipping ethane cargos in March 2016. The second U.S. ethane export terminal, opened by Enterprise Products Partners in Morgan’s Point, Texas, recently sent its first shipment to Norway. 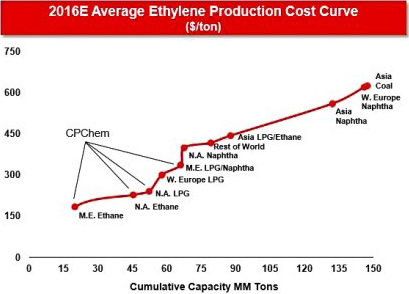 After ethane is separated from methane and the other gases, is then sent by a pipeline to an ethane cracker and then to a facility that converts the ethane to ethylene. The ethylene is then used to create the one of the polyethylene resins. Polyethylene is a plastic resin that can be produced in pellets that are very cheap to make and easy to ship, either in bulk carriers by rail, or ship, or it can be placed in bags for transport in shipping containers.

The construction of several ethane crackers and polyethylene facilities in the U.S. Gulf Coast broke ground in 2013 to 2015. As production begins in 2017-2018, oversupply for a couple years will reduce prices, making polyethylene produced here very competitive, increasing exports to China, Southeast Asia, South America and Europe. 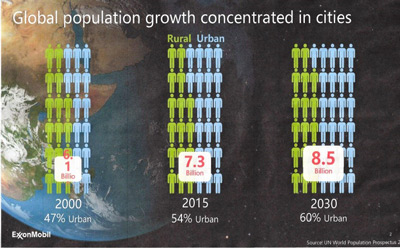 Thomas Deman, Global Polyethylene Marketing Manager for ExxonMobil, spoke at the Global Plastics Summit about ongoing global demographic trends and their impact on the petrochemical business. From 2000 to 2015, the world population has grown by 1.3 billion people, about 21%. From 2015 to 2030, it is expected to grow by another 1.2 billion, so the rate of growth for that 15 year period will slow to about 16%.

Within this trend of slowing growth in total population, continued growth is expected in the urban population. But the most important demographic is the expected growth of the middle class in Asia and the other emerging markets. This trend is expected to drive stronger growth in consumer spending world-wide after the current slow growth recovery runs its course. 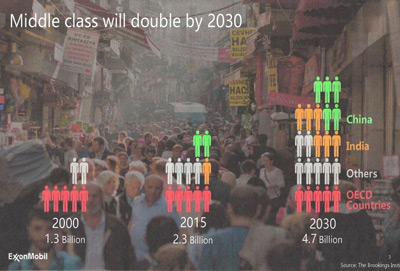 According to estimates by the Brookings Institution, from 2000 to 2015, the portion of the world population that qualifies as middle class grew about by 1 billion people or 77%.

By 2030, the middle class is expected to more than double to 4.7 billion. This astonishing growth (if it happens) will represent a population that is seven times today’s population in this country and about 4 times the combined population of the US and Western Europe. If these long term trends continue, markets outside the U.S. will be growing a lot faster than domestic markets, and the American companies that have the most long-term growth potential are those that compete well in international markets. This group obviously includes Technology, and also Aerospace, because of the dominance of Boeing, as well as Petrochemicals, because of the development of cheap feedstocks and low energy cost created by the fracking revolution.

Jon Tinker, Director of Marketing of Industrial Products for Burlington Northern, at the Global Plastics Summit, described the range of transportation options offered by BNSF to petrochemical shippers. He estimated that polyethylene production in this country will expand from 19 million metric tons today to 24 million metric ton in 2020 and that 30% of the 2020 production will be exported.

BNSF has spent $135 million in expansion of its facilities on the U.S. Gulf Coast since 2009 in anticipation of transportation demand generated by the growth of the petrochemical production in that area. The company’s recent capital improvements are designed to improve the movement of petrochemicals around the United States and to ports for export. They can provide quick, cheap transport in special bulk rail hopper cars for the resins, and tank cars for the gases. Burlington has tracks that connect Houston to several of the major ports on the East, West, and Gulf Coasts.

CPChem, which is 50%, owned by Phillips 66, appears in IHS Chemical Weekly’s listing of the largest companies in the chemical industry for 2015. Listed at number 42nd in total revenue with $9.248 billion, it ranks 13th in operating income with $2.651 billion. It comes in at number five world-wide in income as a percent of sales with 29%, and number six of in the world in 2015 total Capex Spending.

Phillips 66 is currently taking a large portion of the profits from its refining business and is reinvesting directly, and through various partnerships, into petrochemical production and transportation, with higher margins, and hopefully not as cyclical as its refining and retail businesses.

Much of their petrochemical business is centered in the Houston area of the U.S. Gulf Coast, where CPChem is spending $5.5 billion on a new ethane cracker in Baytown, along with ethylene and polyethylene facilities in Cedar Bayou and Old Ocean, respectively.

Phillips 66 and its partners own an extensive system of pipelines throughout the United States which carry natural gas liquids, crude oil, and refined products. They have a pipeline under construction to carry crude oil from the Bakken Oil Field in North Dakota to an Illinois refinery, were it can be refined, transferred and shipped to the East coast or continue South to a terminal in Beaumont, Texas, where it can then be sent to a refinery or the port for export. 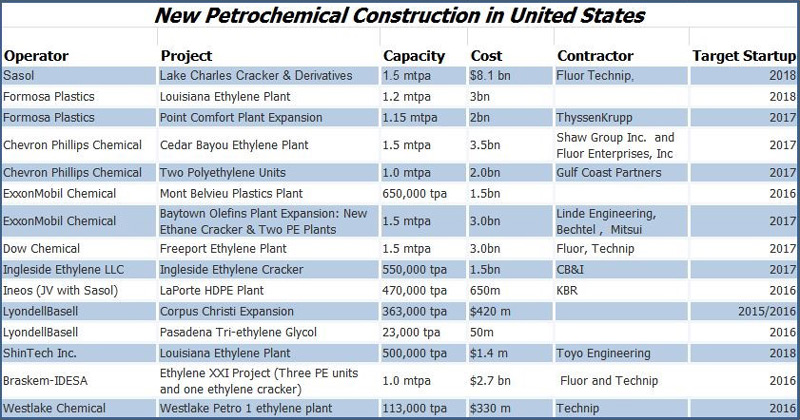