Building nuclear energy in this country is like trying to reform Social Security. There is a lot of talk, but also lots of political and regulatory difficulties (“nice idea, but not in my back yard”). With the cheap energy now available in this country, thanks to the recovery of oil and gas from shale rock, there seems too little potential for CBI to develop much revenue from nuclear energy in the near future.

While these issues may predominate in this country, the picture in the rest of the world is quite different. Chinese officials have said that they would like to quadruple the nuclear proportion of their country’s generating capacity in the next five years, going from two percent to eight percent by 2020, and following that, more than doubling it yet again to twenty percent by 2030. 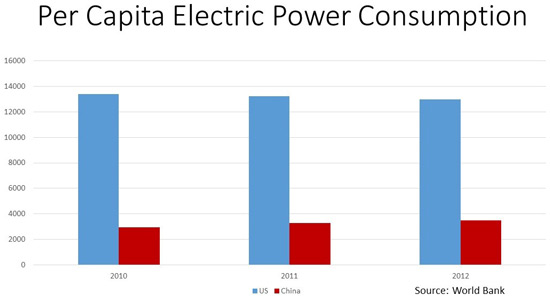 Given the upwardly mobile aspirations of the Chinese people, it is easily conceivable that per capita consumption of electric power could double from existing levels. Assuming zero population growth, such a doubling in per capita demand would require more new generating capacity than the all of the existing US electric grid.

Coal fired power plants are the biggest source of carbon emissions in China.

China has a strong incentive to switch to nuclear energy because of their air pollution. Much of air pollution in the country today comes from the coal that is used to generate electric power. Coal is currently their only cheap energy source, but the pollution problem limits its usefulness. 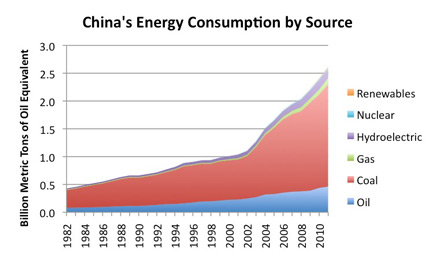 China does have a lot of shale rock, but estimates are that it will take 15-20 years to build the infrastructure (pipelines and processing facilities) they would need to tap into this resource. The same restriction will apply to their ability to build generating capacity based on Natural Gas.

Currently there are eight of the Westinghouse AP1000 reactors under construction, four in the US and four in China. CBI is currently involved in the design and construction of all eight of these units. The Westinghouse AP1000 is a third generation nuclear energy reactor and current state of the art. This design is able to deal with the danger of a meltdown by means of a passive shutdown design.

In other words, if any kind natural disaster or accident shuts of electrical power to the station, the reactor will automatically shut itself down without the necessity of human intervention or back up power, and therefore avoiding the contamination problems confronted at the Fukushima Daiichi nuclear energy station in Japan.

The construction of The AP1000 nuclear energy reactors involves lots of off- site fabrication of very large pieces by different fabricators. Many of these parts are so large that they have to be shipped to the construction site on specially designed rail cars or trucks. The modular assembly approach is a little like building a Boeing 787, so it is not unreasonable to expect that there would be problems with the first units assembled.

Because of the pre-fabricated nature of the design, it is reasonable to assume that it will be a lot cheaper (and more profitable) to build the 10th unit than the first ones. Thus, it seems likely that full potential from this type of construction lies well down the road.

CBI has indicated that they will not get involved with new nuclear projects until they have settled the problems in South Carolina and Georgia. This makes sense because of the negative impact of the current projects on the company’s stock (hot money is not concerned with things like long term competitive advantage), and because CBI is currently in negotiations with all the other parties to the existing contracts to determine who will pay for what.

China is currently negotiating with Westinghouse for 12 more reactors to begin construction in the “near future”. Westinghouse’s CEO Danny Roderick has estimated that China could build as many as 200 additional reactors in the next 15 years.

In 2013, CBI signed a similar agreement with CPI Power Engineering Co. Limited., a subsidiary of China Power Investment Corp. So, CBI now has EPC agreements with two of the three biggest electric power companies in China. There were no dollar figures or specific contracts listed in these announcements, so it is hard to estimate the impact on CBI’s future revenue. We are just going to have to watch this space.

Part of the deal that Westinghouse negotiated with China to build its first four reactors was an agreement to license the technology on which the reactor is based to China. As a result, China now has their own design (ACP1000 nuclear energy reactor) which is already under construction in China, and which they intend to market internationally. If history tells us anything, we can expect that China will try to do as much of the nuclear construction as they can by themselves, but at the build rates indicated above, they are going to need help.

Nor is China the only country that expects nuclear development. Westinghouse is currently negotiating with Kazakhstan, Turkey, and South Africa among others to build AP1000 nuclear energy reactors. One of the Chinese AP1000 projects is projected to go on the grid early next year with the rest later in 2016 or early 2017. It will be interesting to see how much of this business CBI will take on.