“Frackers” by Gregory Zuckerman is interesting and important book, and is a must read for anyone interested in the price of oil. It is a story is about a handful of American wildcatters that struggled for twenty years to find a way to recover the oil and gas trapped in shale rock. There are no Harvard MBA’s, no large international oil companies in this group, just a few middle class Americans and a couple of second generation Greek immigrants. Their energy quest turned out to be much more difficult than they expected it to be.

A few of the contestants lost their energy companies to bankruptcy in the process, but those that survived long enough to understand multistage fracking and horizontal drilling not only have become multi billionaires, but have changed the world in a way that very few people ever will. But, above all it is a story that could only have happened in America.

It is easy to underestimate difficulty of this energy quest or the enormity of the accomplishment of this small group. Fracking had been ignored as a waste of time and money by the major international oil companies. It was not until 2009 that the last pieces of the puzzle finally came together and this group of small independent producers began to produce oil and gas in meaningful quantities. Now the trickle has become a flood and all of the existing assumptions that have governed the energy business are beginning to change (for example “Peak Oil” now has been put off for a few generations).

We are just beginning to see the potential of deficit energy – tight oil and gas. Natural gas prices in the US are a third of what they are in Europe or Asia. This has profound implication for the American chemical companies which in the eighties watched most of their business move to Asia. There has not been a new ethane cracker (the starting point of all plastics) built in this county for twenty five years.

Now, in early April 2014 CP chemical, a joint venture between Chevron and Phillips 66 broke ground on a $6 billion dollar ethane cracker in Bay town Texas very close to a similar sized facility already under construction by Exxon Mobile. Ethane is a hydrocarbon and belongs to the group of natural gas liquids (or NGLs). NGLs include ethane, propane, butane; and natural gas. Natural gas processors separate the raw gas stream into these various components.

An ethane cracker is a massive piece of equipment needed to convert ethane into ethylene which is used to make plastics. CP Chemical will also build two polyethylene units which convert ethylene into polyethylene pellets. The pellets are used to make a variety of industrial and household plastics. Key end-use markets for ethylene are appliances, computers and electronics, plastic and rubber products for automotive and aerospace markets. So far, the chemical industry has announced $105 billion of similar projects in the United States based on cheap gas and energy some of which are listed on the table below. 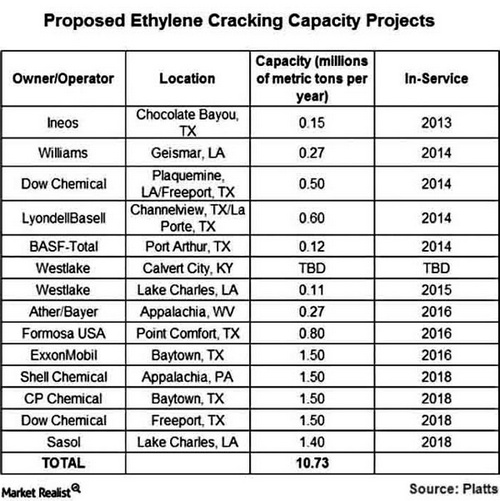 The rapid conversion of electrical generating capacity to cheap gas means that electrical rates in in the United States are now among the cheapest in the world. For the next few years the advantage will be with the United States because of the head start these wildcatters have given this country, but in the long run this is a global event, as many countries have large areas of shale rock. Mexico and Argentina have large areas of shale that can produce oil. Europe has shale and China has the world’s largest reserves of shale gas.

In the long run, shale can have a profound impact on countries that produce petroleum and the price of crude oil. Barron’s lead story in its March 29, 2014 predicted that oil will drop in price to $75 dollars a barrel and that could have negative implications for countries such as Russia since much of their oil comes from Siberia and costs more to produce than oil from shale.

As energy in general and oil in particular get cheaper it will lower the cost of producing clothing, paints and carpet (to name a few Berkshire products), and almost anything else made of plastic for that matter. Energy independence for the US will change the face of international politics, because we will no longer have to buy Crude from countries with politics we do not like.