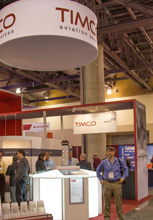 In April, we attended the MRO America show in Phoenix. This is a gathering for Maintenance Repair and Overhaul industry for commercial and military Aircraft. The buzzword this year in aircraft maintenance, as with the chemical industry, is re-shoring. Emerging market wage scales have increased as American wages have flat lined for ten years, to the point that a number industries are finding that this country is a much more competitive place to do business than has been for the last 30 years. For the aircraft maintenance companies that are returning to the U.S., the biggest problem is the ability to find skilled workers. It seems that the American worker is not much interested in being an aircraft mechanic.

We are in Phoenix for a better understanding of Triumph Group, its business, its competitors and the International Aerospace Industry. Triumph Group started out as an MRO company in 1994, but since then has expanded to a much broader footprint in Aerospace through acquisitions, the biggest of which was the 2010 purchase Vought Aircraft for $1.1 billion which more than doubled the company’s revenues. This purchase brought Triumph Group into the manufacture of large aero structures for commercial, military and business jet aircraft, a business that includes fuselage sections, wings, empennages, nacelles and helicopter cabins.

Triumph Group has acquired 40 companies since 1996 including three in 2013, two in the 2014 fiscal year which ended March 31, 2014, and one so far in the current year to date. Management has adequately demonstrated its skill in capital allocation, by a very selective program of purchasing mostly smaller companies with complementary product lines. The companies purchased are left to run on a semi-autonomous basis following, to some extent, a Berkshire Hathaway model. Though out this period, the company has increased its bottom line by an average of 14% per year.

Aerospace Systems Division, with 23% of total revenue, had the best margins, representing 48% of pretax profit. This division probably has the best profit model. First, it sells parts to Aircraft Original Equipment Manufacturers, then, once the part is on the airplane (which may have a 25 year life), it is possible for the original manufacturer to get a decent profit selling replacement parts. Triumph Group’s latest acquisition of the hydraulic actuation business of GE Aviation will be a part of this division. The business is expected to add approximately $180 million in annual revenue and to be immediately accretive to earnings. The purchase price was approximately $70 million.

At Triumph Group’s shareholder day on June 11th in New York, CEO Jeffry Frisby pointed out that Aerostructure’s results were penalized in the 2014 year by costs related the construction of a major plant in Dallas, and by pension fund charges related to the 2010 Vought acquisition. Looking ahead, he said it was the Company’s intention to focus with future acquisitions on adding revenues to the Aerospace Systems and Aftermarket Services divisions. He added that charges for the plant expansion and pension charges would end in the 2015 Year. Frisby outlined the company’s long term goals and expects they will be able to resume its double digit bottom line growth. 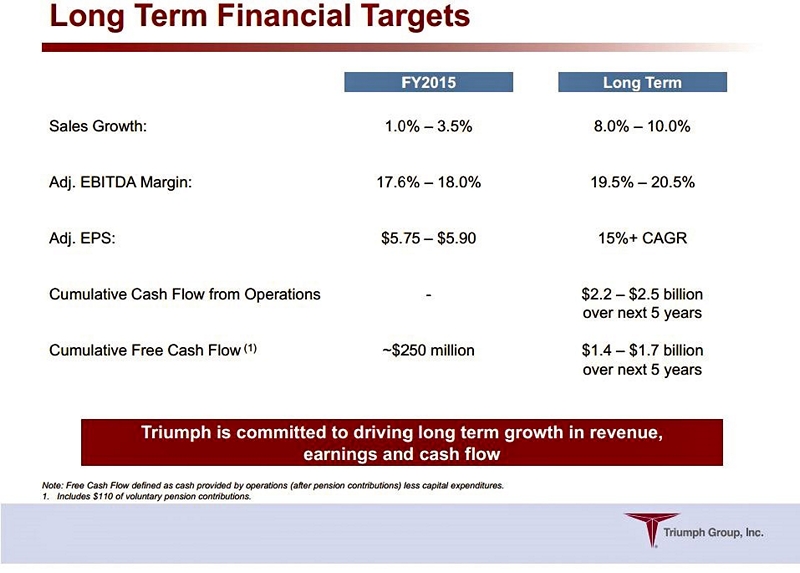