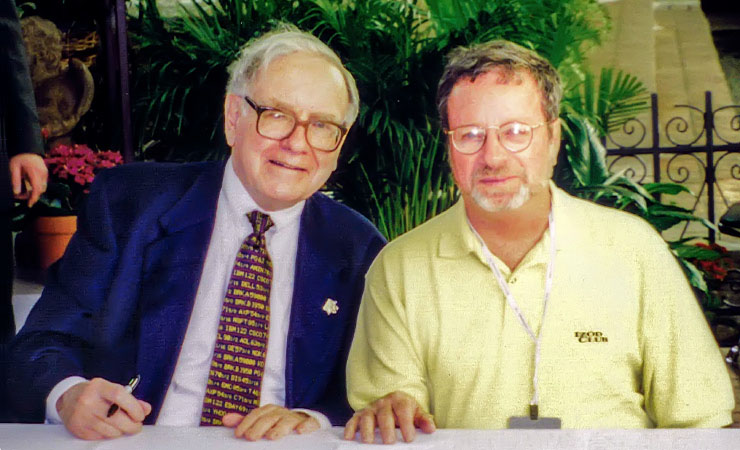 So what is the point at which Berkshire Hathaway will start repurchasing the stock? When there is no Warren Buffett premium while we can only guess what it is today, we know what it was in 2000 when Warren Buffett offered in his Berkshire Hathaway chairman’s letter to buy the stock at $45,000 or less. The table below shows where the buy-in point would be today with the indicated assumptions about Berkshire Hathaway’s intrinsic value’s long-term growth rate. The table assumes a uniform growth rate, and growth in intrinsic value is, of course, never constant. However, over time the lumpiness does tend to average out.

Keep in mind that Berkshire Hathaway’s intrinsic value and the Warren Buffett premium would be a lot higher today if Warren Buffett had been able to invest the $45 billion he has in cash in long-term investments at what he considers a satisfactory rate. So while Berkshire Hathaway’s value may have grown at only 8% to 12% for the last five years, it is likely that it will be able to grow at a somewhat more rapid rate in a different market environment (a bear market).

Assuming that we can tolerate these generalizations, what does the table say? If you assume Berkshire Hathaway’s intrinsic value is growing at a 10% annual rate, the buy-in point at the middle of 2005 will be $76,097. If you assume 12% growth, the buy-in comes in at $84,064.

It is obvious to everyone that the company can no longer sustain its historical growth rate of 23% to 24%. But even at Berkshire Hathaway’s present size, 10% to 12% growth does not seem to be totally unreasonable, what with the leverage it gets from its insurance float, and the Warren Buffett Premium.

For a graphical representation of the data on Table One, see the chart below. The 6.8% line represents the rate of growth of per-share book value for the period since Warren Buffett’s stock purchase offer in March 2000. Warren Buffett has been quoted as saying the Berkshire Hathaway’s intrinsic value has been growing much more rapidly than its book value, so we can use this line as bottom range for the growth in the buy-back price. Actually the bottom of the range must be somewhere above that line since intrinsic value has been growing faster than book value.

“He has a very iconoclastic view of corporate governance that I don’t think anyone but Warren Warren Buffett could get away with”, says McGurn. “That could come back to hurt them as people look at reinsurance practices at Berkshire Hathaway”.

The Board of Directors, he said “is composed exclusively of business partners and friends — including Microsoft Corp. Chairman Bill Gates …” In addition McGurn says the lack of a successor isn’t a joke …

“Berkshire Hathaway is probably the riskiest company in America today because it’s one heartbeat away from a substantial diminution in value”, he says.

But, “The riskiest company in America?” This would be absurd even if there were a huge Warren Buffett premium in the stock, and there is not. It is too bad for a man in this guy’s position that he never learned to read a balance sheet. In the stock market, anything that is obvious is discounted. As soon as something becomes well known, it is in the stock price, and while it’s probably true that the Warren Buffett premium will not be around forever, the market may have already discounted his exit. So we have to wonder if there really is a Warren Buffet Premium.

The fact is, Berkshire Hathaway holds the world’s largest pile of cash, and the stock is very illiquid. On Friday, June 3, the NYSE traded 147 class A shares and 6,550 class B shares. This represents a total value of something like $30 million. At that rate, Berkshire Hathaway would trade something short of $2 billion worth of stock in a Quarter (assuming 65 trading days in a quarter). This means that Berkshire Hathaway could buy every share of stock traded on the NYSE and do it out of cash flow without dipping into their $45 billion. While Friday’s volume was below current trading levels, it is not too far from the long-term trend. It may well be that the Warren Buffett premium is really a discount.

Instead of being “one heartbeat away from a substantial diminution in value,” Berkshire Hathaway at today’s price probably carries less risk than any other publicly traded stock. It is not necessary for Warren Buffett to be here to initiate a buy-back as long as there is someone around who can sign checks.

At last year’s annual meeting, Warren Buffet said that while the day he dies will be a bad day for him, it will not be a bad day for shareholders. This could be just more of Warren Buffett’s Omaha shtick, but I took it to mean (among other things) that the buy-back price is real and that somewhere in his desk there is an envelope that lists the price and gives instructions to his successor.

As the market price approaches Warren Buffett’s buy-in price, the bottom line is that there is no Warren Buffett premium because Berkshire Hathaway will be buying stock whether Warren Buffett is present or not. In fact, we could see a price increase at his departure because his absence would make a buy-in more likely if the company is without Warren Buffett to make capital allocation decisions.

So what is that buy-in point? This is something that only Warren Buffett and Charlie know, but we can guess that it is somewhere between the 6.8% and 12% lines on the above chart. We know it is above the 6.8% line because Warren Buffett has said that intrinsic value is growing faster than book value, and we know that it is not between the 12% line and the 14% line because the stock has traded in that area several times in the last five years and there has been no offer from Berkshire Hathaway to buy the stock.

Table Two indicates that the operating portion of Berkshire Hathaway has been growing rapidly in the last five years. Total revenues grew at a rate of 21% per year, operating earnings at 20.8% per year, and cash flow (which I, have defined for this exercise as reported earnings plus growth of the insurance float) at 17%. These figures are not that far from the numbers that Berkshire Hathaway has been turning out for the last 20 years, but with 2004 revenue of $74 billion, Berkshire Hathaway is simply too big to grow at anywhere near 20% in the long term future.

We do not know if, or at what Price, Warren Buffett will start a buyback program. Still, if he were to do so at a relative value close to the Price he struck in 2000, in my opinion, it would not be too far below today’s market price, and the Warren Buffett premium will have to disappear. The growth rates shown in Table Two would lead you to believe that Berkshire Hathaway’s growth in intrinsic value is a lot closer to the 12% line than it is to the 6.8% line.

We have heard about this Warren Buffett premium for so long, and the universal assumption has always been that there will be stock decline when he leaves. I want to suggest, just for the sake of being argumentative, the possibility of a Warren Buffett discount and propose a scenario where the stock price will increase in his absence. It seems likely the stock is very close to the value level it reached in March of 2000. Warren Buffett may be reluctant to initiate a stock buyback for any number of reasons.

He may well believe that he will have a better use for the money in the not-too-distant future, or he may just not want to pump the stock at this particular time. Absent Warren Buffett premium, though, and we have a different set of circumstances. Take $10,000 off the Class A stock today, and I think the buyback is pretty compelling. Further, without Warren Buffett, the buyback threshold is likely to rise substantially merely because what does the new guy do with all that cash? Without Warren Buffett, the case for returning money to shareholders is much more compelling.