Perhaps the most encouraging indicator of Berkshire’s future growth that of the operating earnings of its companies: the fastest growing part of Berkshire, the portion with almost unlimited growth potential, and the area where Buffett is concentrating the vast bulk of his spending.

Operating earnings from Berkshire’s wholly owned operating companies grew from $4.0 billion in 2006 to $18.9 billion in 2015. The CAGR for the last five years was 13.23 %, and 16.85 % for the last ten years. This figure all by itself tells story of Berkshire’s spectacular growth since 2006, and almost certainly will account for 80%-90% of company’s growth going forward.

In 2005, Berkshire’s insurance companies generated $3.5 billion in operating earnings. By 2015, Operating Earnings had grown to $6.4 Billion, a ten-year CAGR 6.10%. Significantly, the growth has reversed since 2011, and the CAGR of insurance operating earnings for the last five years is a minus 2.6%. 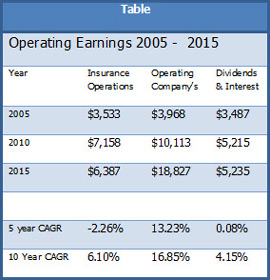 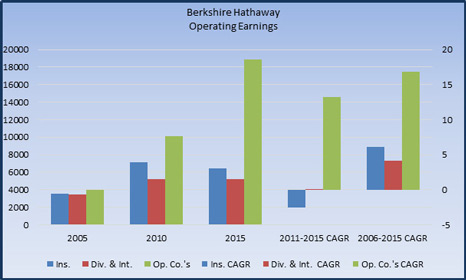 Dividends and interest from the company’s investments grew from $3.5 billion to $5.2 billion, reflecting virtually flat growth for the last 5 years. Total CAGR of dividends and interest for the ten years was 4.15%. Of course, there has been capital appreciation in the equity portfolio, but this figure shows that the equities have not been an important factor in the growth of the Berkshire Hathaway Cash Flow.

With Berkshire Hathaway now at number four in the “Fortune 500” list of largest American companies, the questions are how much larger can it get, and how fast can it grow? In the Eighties and Nineties, Buffett was able to get double digit growth from his investment portfolio, but with the investments approaching $150 billion, that option is no longer realistic. Growth must come from operating earnings of the subsidiaries.

How, then, can investors expect double digit growth from Berkshire in the future? For that answer, we can study the company’s cash flow for clues. In a little over ten years, the money pouring into Omaha has grown from $8.5 billion a year to about $26 billion this year, reflecting a truly remarkable growth rate of 12% for a company as large as Berkshire.

Buffett has continually warned the Berkshire will not be able to grow in the future as it has in the past, but still it grows, and a rate and consistency that has seldom been approached by companies of Berkshire’s size. For at least the last ten years, Buffett has shifted his attention from stocks to acquisitions and internal growth of his existing wholly-owned companies, and their ability to grow in operating earnings. Using the figures from Berkshire’s “Statement of Cash Flows”, we breakdown Buffett’s use of Berkshire’s cash flows into three primary categories: the purchase of equities, the acquisitions of complete business, and Investments in plant and equipment.

In the last five years, there has been even more accelerated movement away from equity purchases and into the purchases of the entire business with established operating earnings and investing in plant and equipment to expand those already wholly-owned companies. From 2006 to 2010, net equity purchases equaled $17.1 Billion. This total was swelled by purchases that took advantage of bargains presented financial crisis in 2008. The equity figure does not include $21.5 billion purchases of convertible preferred stocks bonds and warrants.

From 2011 to 2015 net purchases of equities equaled only $5.1 billion or about one billion a year compared to the $127 billion in free cash flow generated by Berkshire for these five years. During this period Buffet gave $9 billion each to his new portfolio managers Todd Combs and Ted Weschler to manage. This indicates that Buffett has been liquidating some of his legacy holdings to free up money for Todd and Ted, and to finance his activity in acquisitions and to fund purchases of plant and equipment. 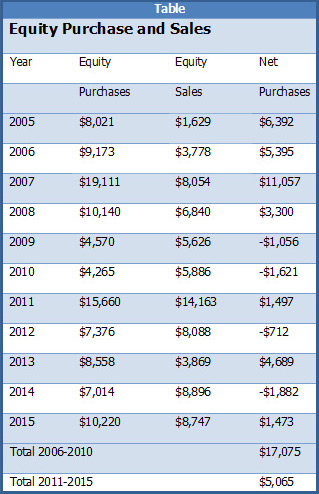 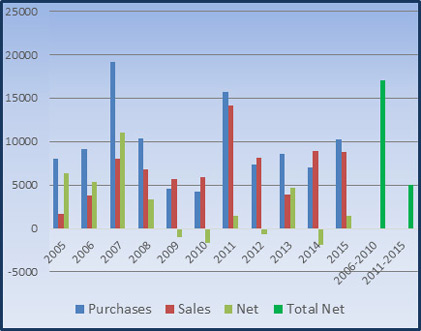 A long bull market in large cap American Value stocks would generate some push from Berkshire’s portfolio, but I really do not see these equity investments as being an important part of Berkshire’s growth potential going forward.

In the period from 2006 to 2010, Berkshire acquired Pacific Corp, ISCAR, Russell Corp, TTI, VF Intimate apparel, BNSF and 60% of Marmon Corp. together with purchases of some smaller companies.

In addition, for the last four years, Berkshire has been spending significant money, $5.8 billion, on bolt-on acquisitions (i.e., the purchase of a smaller company by one of Berkshires existing subsidiaries). 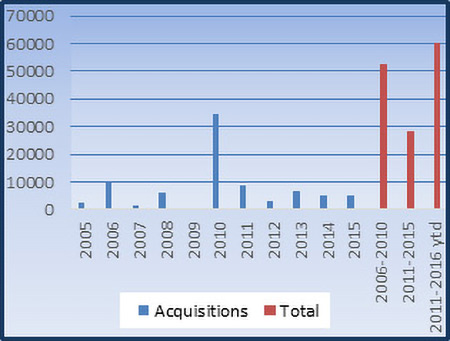 “While Charlie and I search for new businesses to buy, our many subsidiaries are regularly making bolt-on acquisitions. Last year we contracted for 29 bolt-ons, scheduled to cost $634 million in aggregate. The cost of these purchases ranged from $300,000 to $143 million”.

From 2006 to 2010, Berkshire spent $27 billion on plant and equipment. After the acquisition of Burlington Northern in 2010, that figure jumped to $60.3 billion in the five years from 2011 to 2015, and totaled $87.3 billion for the last ten years. Of course, some of the spending on plant and equipment is to replace old and worn out assets, but even if we assume that the amount written off for depreciation (which totaled $47.2 billion) was the amount spent to replace worn out assets, that leaves us with an estimate that $40 billion that was allocated to expanding an existing business, and increase their operating earnings.

Most of the depreciation probably came from BNSF and Berkshire Hathaway Energy. All things considered, the $22.1 billion that was spent on adding to the equity portfolio in the 10 years pales in comparison to the $152.4 billion on buying new business and expanding existing business. 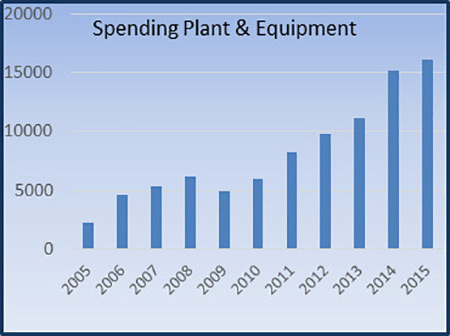 Despite these considerations, to the world in general, and financial analysts in particular, Berkshire has been valued during this period largely based on the success or weakness of the company’s equity portfolio. Yet, in terms of today’s cash flow and operating earnings, these equities are no longer an important consideration in estimating the company’s future growth potential.

This is not to say that the investments are not important. More of the $150 billion can be handed off to Todd and Ted, or perhaps an additional new manager, and positions can be sold off to finance spending on new acquisitions or plant and equipment spending, or better yet, traded for tax free acquisitions.

Sources of Funds for Expansion

Buffett has identified three sources of tax free cash flow at Berkshire Hathaway in addition to GAAP net earnings. The first and most well-known of these is, of course, the float generated by Berkshire’s various insurance operations. In addition, in his annual letter this year, he identified amortization as a charge against operating earnings, 80 percent of which does not represent any real cash expense.

The third area of cash flow that is not included in GAAP earnings is the difference between the income tax expense listed on the income statement and the actual cash paid out each year to the IRS, a large part of which is deferred taxes on the unrealized gains in the company’s stock portfolio. At the 2011 Annual meeting, Buffett pointed out that while the operating earnings statement lists income tax that generally amounts to about 30% of pretax income, what the company actually pays amounts to about 13%.

These three cash flow items for the last five years are listed in Table below. They add up to $43.1 billion for the five year period when after tax income totaled $88.6 billion. This is money that is not considered income but that Buffett can use for expansion. For the period covered in table, the companies’ reported income understates the cash that Buffett had to invest by almost 50%. All of this extra cash flow is tax free and, in the case of insurance float, since the insurance operation shows an underwriting operating earnings, we get paid to hold it. 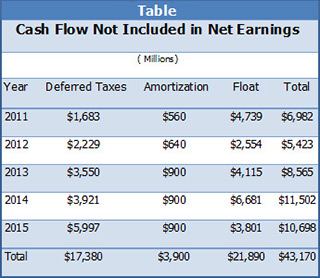 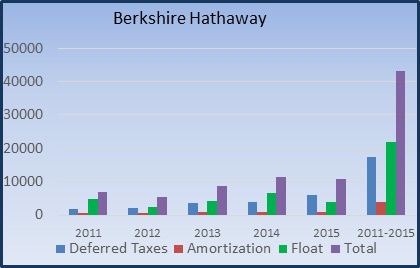 One way to estimate Berkshire’s total cash flow is to use the numbers Berkshire spends yearly as shown year in the annual “Statement of cash flows”. If you add the “cash flows from investing activities” (money spent on equity investments, acquisitions, and property and plant and equipment) to the “change in cash and cash equivalents”, and subtract the “cash flows from financing activities” (since Berkshire does not pay a dividend or buy back stock, the amount the company increased or decreased its outstanding debt). According to these figures, it appears that Berkshire spent $132.4 billion during the 5 year period when its total reported earnings of $88.6 billion.

Of course, not of all this cash is available to fund expansion or purchases of new businesses. As Buffett and Charlie have told us many times, depreciation is a real expense, so to get at “free” cash flow (money that can be used to buy good stuff), we subtract depreciation from total cash flow. For 2015, free cash flow was $23.5 billion after deducting $7.8 billion from total cash flow.

Operating earnings are the way Buffett prefers compare the growth within the various segments of the company because GAAP reported earnings are distorted by trading operating earnings and non-cash charges. But, since Berkshire’s ability to continue providing 10% plus growth in the future is dependent upon Buffett’s ability to spend his rapidly growing pile of cash on more acquisitions and plant equipment spending, the rate of growth in Berkshire’s cash serves as a strong indicator for the appreciation that we can expect from the price of the stock.

One thing I like about these numbers is they are not as lumpy as reported earnings, so they give a better feeling for the trend.

With the addition of Precision Cast Parts and Duracell, Berkshire could have north of $26 billion to spend this year.

Revisiting our original question, can Berkshire continue to growth at this rate? It can, but it is not going to be easy, and the growth is not going to come from its investment portfolio. It will come from the growth of the operating earnings of its wholly-owned companies. With PCP in hand, internal growth will probably accelerate, but for Berkshire to have any shot at double digit growth going forward, Buffett will need to find more large, attractive purchases like Burlington Northern, Lubrizol, and Precision Cast Parts.

With $50 billion in cash, and cash flow near $26 billion a year and growing, he will certainly have the ammunition to fund some interesting purchases.

In his Chairman’s Letter this year, Buffett reviewed the recent results at Burlington Northern and Berkshire Energy, making a strong statement about the Company’s Culture, and sending a message to large company CEO’s tired of a stock market only interested in the results for the current quarter and an endless series of “master of the universe” hedge fund managers convinced that they know how to run any business better than the current CEO. 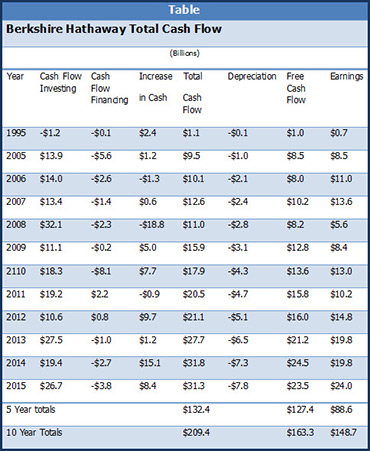 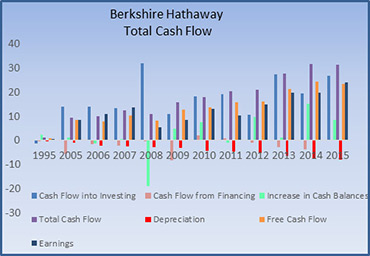 BNSF moves about 17% of America’s intercity freight (measured by revenue ton-miles), whether transported by rail, truck, air, water or pipeline. In that respect, we are a strong number one among the seven large American railroads (two of which are Canadian-based), carrying 45% more ton-miles of freight than our closest competitor. Consequently, our maintaining first-class service is not only vital to our shippers’ welfare but also important to the smooth functioning of the U.S. economy. For most American railroads, 2015 was a disappointing year. Aggregate ton-miles fell, and operating earnings weakened as well. BNSF, however, maintained volume, and pre-tax income rose to a record $6.8 billion (a gain of $606 million from 2014).

Buffett’s message to CEO’s, Come join us. Stop worrying about quarterly operating earnings numbers and concentrate every day on building your moat — we will help make you the best in your industry. Even with his compelling message, Buffett’s ability to find what he wants, at the price he is willing to pay, looks challenging, and resumption of the long bull market is certainly not going to help.

With cash flow at $26 billion a year and growing at 12% per year, with $50 billion cash, and equities of $125 Billion that can be sold or traded, Buffett certainly has the ammunition to make the next few years interesting.