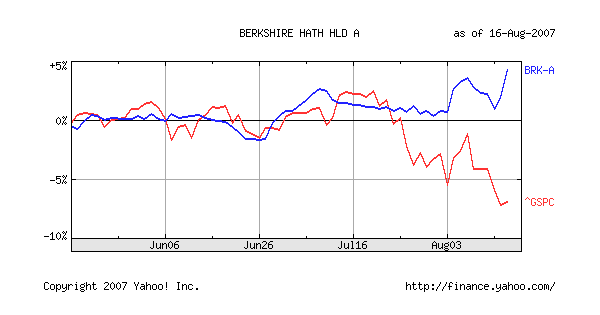 In an interview with Gifford Combs in this weeks Barron’s, Combs values Berkshire Hathaway’s operating business at $70 billion and the finance and utility business at $26 billion, then gives the following estimate for the insurance business.

“The majority of the value at Berkshire Hathaway hedge fund is in the insurance entities, which hold virtually all of the investments. The insurance business depends upon the value one places on the $58 billion of “float,” which are the non-interest-bearing liabilities of the insurance companies. Adjusting for the float and making allowances for deferred taxes, I value the insurance companies at nearly $200 billion. The total comes to more than $290 billion, or about $190,000 per share. More conservative assumptions about investment returns over time would lower that value; but it’s hard to get to a number much below $150,000 per share.”

“If you look back some 30 years and looked at articles in The Wall Street Journal, everybody was worried about what was going to happen to GE after Reg Jones retired and, you know, they found Jack Welch. Five years ago, we were worried what was going to happen to GE after Jack Welch retired, and Jeffrey Immelt came along. Don’t you think we ought to give Warren Buffett a little of the benefit of the doubt that maybe he could identify somebody to succeed him who can do a decent job? Will the guy do as good a job in investing? Probably not.

But the interesting thing is, the valuation doesn’t depend on having a superstar investor. The business has tremendous momentum in its own right, and it has a tremendous set of managers, and it is probably selling as cheaply today as almost any time that I can recall in certainly the last 10 years.”

If that wasn’t enough the cover story of this week’s issue also plugs BRK. Says that current market dislocations could work to the benefit of cash rich companies such as Berkshire Hathaway and Loews. This is more proof of my concept of the Berkshire Hathaway hedge fund.