Is the Market Overvalued?

The FED indicates it might raise interest rates a quarter-point, and Mr. Market gets depressed. We have been living with these abnormally low rates for so long that investors seem to have lost perspective. Realistically, it is going to take a lot more than a quarter percent rise from here to have any impact on our economy. In 2008, the FED had to raise rates to 5.50% before the economy started to cool. In 2000, rates got to 6.75% before the tech bubble popped. 1990, a recession was preceded by rates of over 10% and a market overvalued. The granddaddy of all bubble poppers was Volker’s 1981 peak of 22.5%. Yet now Mr. Market is saying that an increase from .5% to .75% is going to tank the economy.

To get back to the 2008 peak at the current rate of increase would take 8.5 years. Even if we double the current rate, moving up to a quarter of a point every quarter, it would still take almost five years before you get to anything that approaches tight money. Certainly, there is much for the market to worry about, although there is some indication a market overvalued. Generally, there is nothing in the political news that is likely to help the economy, and specifically, there is a lot of conversation about high valuations in the stock market.

However, upon closer inspection, much of this overvaluation is concentrated in a small number of very large capitalization and dividend-paying stocks. It is a bit of oversimplification to apply this market overvalued characterization to the stock market as a whole. It is still not difficult to find reasonably priced companies, even though this is not the impression you get when seeing the price: earnings ratio of the S&P 500.

Undoubtedly, one of the best examples of this is Berkshire Hathaway. At its current price, it offers a very attractive balance between risk and reward. Others include IBM, Fluor, Phillips 66, Core Molding Technologies, and Chicago Bridge and Iron, to name a few.

While sentiment indicators mean very little most of the time, they can help identify what is going on in the minds of investors, particularly when there is a market overvalued. (Buy when others are nervous raise cash when the fear goes away).

Currently, Investor Sentiment shows only 17% of investors are bullish as May 26, 2016, the lowest level of bullish sentiment since 2009, so this is not a Market Overvalued market Short interest on NYSE stocks is currently at all-time highs. A poll of professional investors by “Barron’s” Magazine earlier this year showed institutional investors with the lowest level on long equity position since 2012.

This is not to say that sentiment indicators should always be taken as absolute contrary indicators. Still, I sense that periods of high bearish sentiment are times that do not coincide with high risk in the market. If everyone is already bearish, there is not a lot of fuel left to generate a significant decline.

Correcting Market Overvalued (It May Take a While)

While seems evident that many stocks in the current market overvalued condition on various ratios of corporate earning to market prices, it is not quite so obvious how that over-valuation will impact the market over the next few years. The high valuations are mostly the result of the FED’s monetary policy and not the result of an economic bubble. Low-interest rates have given investors in search of a decent return little choice other than piling into equities.

Lacking the sort of economic instability necessary to generate enough panic to propel a rapid market decline, we may be left to find another way for the market to correct its rational exuberance.

The FED, with no room left to fight a repeat of the 2008 crash at this point, is likely for the near future to do anything it can to get the economy moving upward more rapidly, an endeavor joined enthusiastically by many European central banks.

Many bears await a repeat of the 2008-2009 and 2000 price drops to correct this market overvalued. In this context, it may be worth considering Mark Twain’s comment that, “A cat that sits on a hot stove once will never sit on a hot stove again. But it won’t sit on a cold stove either.”

Perhaps the most overlooked risk facing bearish investors is that the current high market P/E ratio could also be corrected by increasing earnings – a strong recovery in the international economy such as we experienced in the 1980s and 1990s, which resulted in strong double-digit growth for American corporations year after year for much of that time.

Hyman Minsky’s famous quote, “stability unstable,” while contradictory, is nevertheless a short and concise description of the forces that underlie the business cycle in a market economy. Minsky, a liberal economist at Washington University in St. Louis, explained that the reason a stable market environment generates instability is that bankers react to recent history. If their experience includes a little risk of loss (few loans in default), then they are compelled to risker loans.

The longer this stability lasts, the lower the quality of new loans and make the market overvalued as a result of myopic institutional memory. As time passes from a financial crisis, the memory of pain dims, and lessons are forgotten. Besides, over time, veteran employees retire, and the new hires enter the field without the benefit of painful lessons first hand. In a game resembling musical chairs, those hold outs who continue to resist temptation lose market share to the risk-takers and we get to market overvalued.

This condition applies not to just bankers and Wall Street, but to all participants in the economy. To have a respectable financial crisis, you first have to build a speculative bubble. It took 40 plus years, from 1929 to the early 1970s, to create a new bubble, suggesting that not just the dimming of memories, but also the introduction of a new generation of participants was necessary for the creation of dangerous speculation.

However, there is nothing sacred about this 30-40 year time frame. From the 1973-1975 crash, it took only twenty-five years to generate the dot com bubble, and the market overvalued. It is not the time that is important in predicting the end of a cycle, but the level of speculative enthusiasm. The speculative bubble is difficult to recognize because it is mostly a collective total lapse of memory. Events and time erode the memory of the last collapse.

Further, as we saw in 2008, a bubble can continue to expand for a long time after a rational investor recognizes its existence. Often a progressive nature of preliminary market conditions can set the stage by lulling investors into complacency. Then, add in fear of missing out, and “this time it’s different” rationalization, and the play unfolds like a Shakespeare tragedy.

Our current place in the economic cycle makes me somewhat sanguine about any present danger of a significant market crisis. Our rearview mirror is so currently consumed by the twin bubbles of the 00’s that is unlikely that those lessons will be forgotten soon, so bubble formation will be consequently limited, and corrected before they can cause significant damage before there is a market overvalued.

This is not to say that the next ten years will be boring or without a correction, and it is certainly not to say that the next bubble will not be worse than what we saw 2000 and 2008. But with any luck, it may be 15 to 20 years or more before the next crisis-level bubble and market overvalued can form. It could take that long before we can collectively forget all the lessons we learned in the ’00s.

As the cycle extends, things begin to loosen up: consumers spend more, corporations think more about expansion and less about survival. Toward the end of the cycle, you can expect banks to focus only on profits (if the competitor across the street is growing profits faster by making riskier loans, you have to get up and dance). This cycle usually takes many years to get to market overvalued, although, again, there is nothing sacred about the 30-40 year interval. 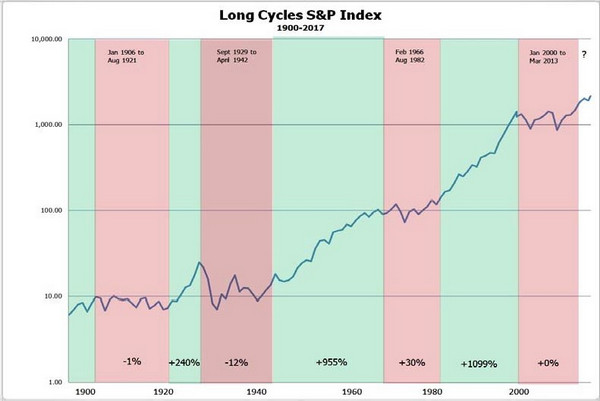 The longer the cycle lasts, the more secure the consumer gets, the more we see Market Overvalued. Low unemployment and high job security fuel the desire for a bigger house and a more beautiful car. As the memory of bankruptcies fade and credit is easy to get, businesses focus more on expansion and borrow extensively to finance projects they think will raise profits and increase the value of their stock options.

If your competitor is growing earnings faster than you, fear of missing out drives the need to find a way to keep up or lose your job. The pressure on regulators switches from taxpayers angry about abuses of the regulation to legislators seeking favors for their constituents.

The slow growth here and weakness around the world, together with the sentiment indicators quoted above may be symptoms of the caution typical of the early stages of a prolonged economic cycle, and not a market overvalued. Large banks have been forced by Dodd-Frank to rapidly increase their equity capital from the absurdly low levels of 2006-2010. On the one hand, increased bank equity capital makes the economy more stable, because it reduces risks in an economic contraction. On the other hand, it has a robust deflationary impact on the economy because it shrinks the money supply.

With the banks raising equity capital rapidly and paying substantial financial penalties to the government because past transgressions real and imagined, the money supply could quickly have shrunk fast enough to create a good old fashioned depression like the 1930s. The FED has acted to prevent this, growing the money supply by pumping in cash, by the way, Quantitative Easing. This very well may have prevented the country from slipping back into a recession. However, despite this aggressive pushing on the money supply string, the country has still not returned to a satisfactory growth rate.

It may be that what the country needs now is a more potent fiscal stimulus to get to market overvalued. This preferably in the form of infrastructure spending on highways bridges, other transportation, and the nation’s electric power grid. So, maintain the growth of the money supply—an activity contrary to the political carping that may well have prevented us from repeating the 1930s.

Despite the rapid growth in the money supply, our economy is still only expanding slowly. The problem is that Velocity (the rate at which money is spent) has dropped off a cliff. Velocity is dropping because people and businesses are not spending at their regular pace. Instead, people are saving more (the proportion of people with credit scores that would classify them as sub-prime borrowers have dropped to the lowest point in the history of these records).

Banks are restricting new loans to comply with stricter regulatory requirements, and Corporations are delaying expansionary spending because of the uncertain economic background, and market overvalued. Combined, these factors strongly indicate conservative behavior in our economy. The country abounds in liquidity, but people at all levels are reluctant to spend. All in all, this is not a picture of a bubble ready to pop, or a market overvalued.