“Reported earnings are a poor measure of economic progress at Berkshire Hathaway, in part because the numbers shown in the table presented earlier include only the dividends we receive from investees — though these dividends typically represent only a small fraction of the earnings attributable to our ownership. Not that we mind this division of money, since on balance we regard the undistributed earnings of investees as more valuable to us than the portion paid out. The reason is simple: our investees often have the opportunity to reinvest earnings at high rates of return. So why should we want them paid out?

“To depict something closer to economic reality at Berkshire Hathaway than reported earnings, though, we employ the concept of look-through earnings. As we calculate these, they consist of: 1) the operating earnings reported in the previous section, plus; 2) our share of the retained operating earnings of major investees that, under GAAP accounting, are not reflected in our profits, less; 3) an allowance for the tax that would be paid by Berkshire Hathaway if these retained earnings of investees had instead been distributed to us.”

In 1997 Warren Buffett listed look-through earnings of $1.930 billion, which would have been $1,564 per share based on the 1,234,127 shares that were outstanding on December 31, 1997. This would mean that per share earnings growth for the seven year period was equal to 15.2% on an annual basis, for the period that includes both the purchase of General Re and 9/11.

But “Reported earnings are a poor measure of economic progress at Berkshire Hathaway.” This may not be quite as relevant today as it was in 1997, but it is still true. Indeed, look-through earnings are helpful but they still do not give anything close to a completely definitive window into Berkshire Hathaway’s intrinsic value.

If we subtract $70 billion for debt and insurance obligations, you could probably remove $40 billion and not impair the on going status of the business. Remove $40 billion, or $26,000 per share, from the present market value and you are left with $57,000 per share and divide it by $4,222 per share earnings and it gives you a PE of 13.5. This is still ignoring the investment gains.

Granted the above process lacks a certain analytical neatness, and maybe 13.5 seems seem like a screwy number, but I like it better than 19.6 or 22 (which is what Standard&Poor’s says it is). The reason I like it is that I feel it gives a simple and reasonable picture of Berkshire Hathaway’s value relative to the over all market. Something that simply comparing operating earnings to the market price does not do. 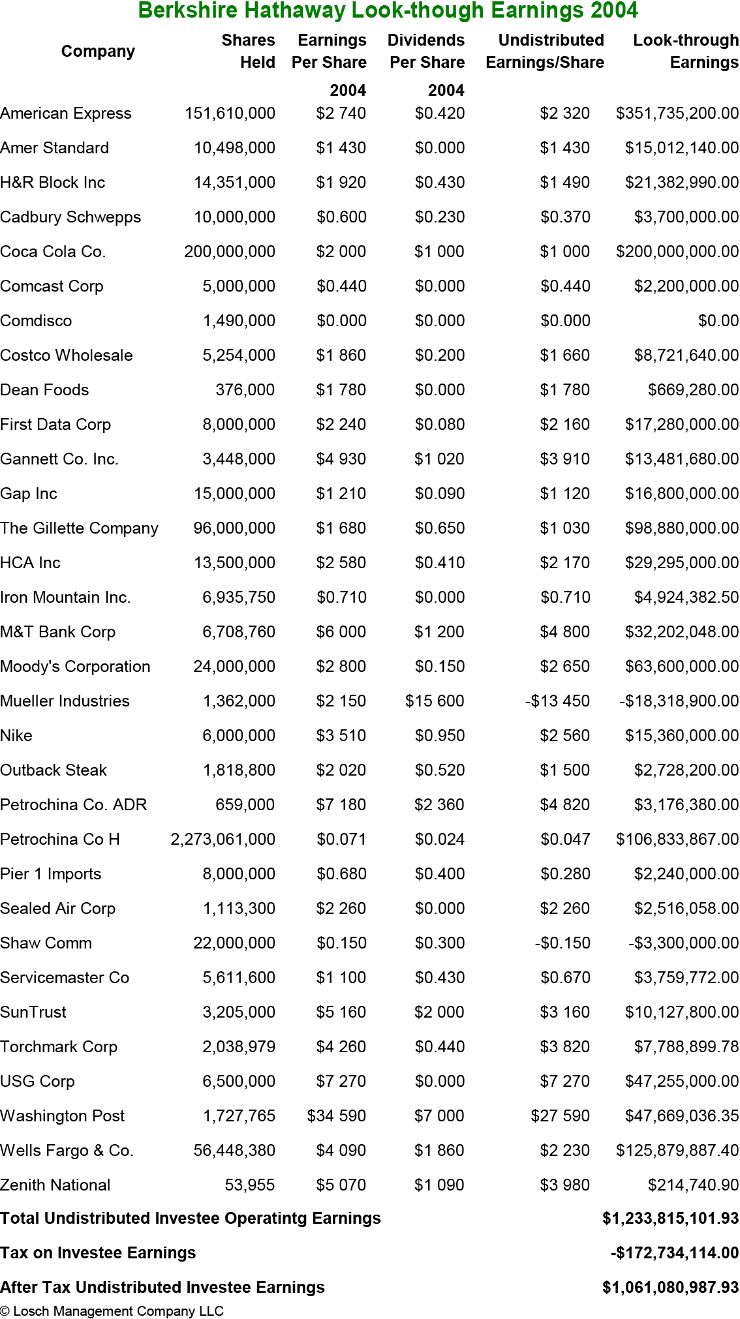