Our year started nicely with our accounts making new highs in January on the basis of recent tax cuts and a strong economic news back ground. From there things deuterated, in spite of the fact that corporate earnings have remained strong. The reason for this is not hard to understand.

We started the year with a group of stocks heavily weighted to a strong growth in international trade, and the rapid expansion middle class income in south east Asia. Clearly, I was not prepared for a President Trump who likes to make war on our trading partners.

While Trump may well be justified in Trump’s claim that China needs to correct those policies that it has used to protect some of its domestic industries, and produce an unfair competitive advantage, Trumps approach is bit heavy handed and unlikely to generate a positive response from China’s leadership.

Trumps attitude – “we can hurt you more than you can hurt us”, might be technically correct but is hardly the best way to deal with a country who will someday be your biggest customer.

For example, our General Motors warrants which in January traded above $27 are currently trading at $17.40. The Trumps tariff is supposed to help American companies, but apparently not designed to help companies with a strong international presence. 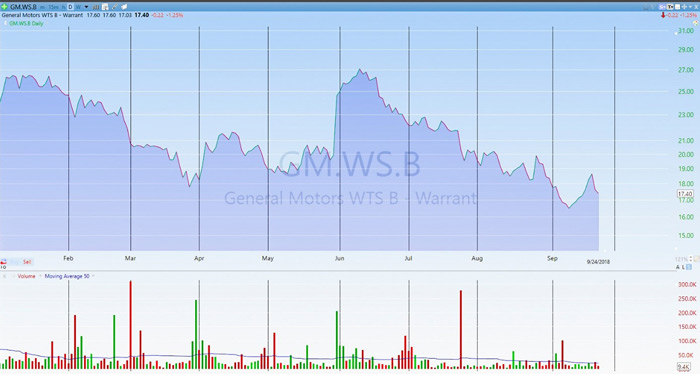 GM, along with its joint ventures, offers the broadest lineup of vehicles and brands among automakers in China. Products are sold under the Buick, Cadillac, Chevrolet, Baojun, Wuling and Jiefang nameplates. General Motors and these joint ventures sold more than 4 million vehicles in China in 2017.

Retail sales totaled 4,040,789 units, which was up 4.4 percent from the previous high in 2016. China was GM’s largest retail market for the sixth consecutive year.

China is already the largest car market in the world and if The American automotive industry is going to establish the scale it needs to sell automobiles to the world. Then China is going to be its most important market for the next few years. With a population 4 times that of the U.S., and as Chinese middle class income grows closer to that in this country the Chinese will be looking to buy more upscale vehicles.

General Motors already sells more vehicles in china that they do in the U.S., and the Chinese market growing faster than U.S. the key to maintaining world scale, not just for GM but for any manufacturer, American German or Japanese. Will be success in the Chinese market.

BMW’s manufacturing plant in Spartanburg, South Carolina opened in 1994 currently has the highest production volume of the BMW plants worldwide, The models produced at the Spartanburg plant are the X3, X4, X5, X6 and X7 SUV models.

BMW has proven that it can build automobiles in this country using American labor, and sell then to the rest of the world. Yet Trump’s “America First” campaign has succeeded in making this more difficult by placing a tariff on imported steel and aluminum and thereby raising the cost of producing vehicles in this country.

In Addition China’s reaction to Trump’s tariffs on Chinese imports has been to impose a tariff on all vehicles built in this country which is likely to result in some of those 9000 citizens in South Carolina loosing their jobs.

What is true for BMW also applies to Mercedes Benz which has a plant employing 4000 in Alabama.

Damage from Trump’s trade war is definitely not limited to the automotive sector. The Wall Street Journal on sept 25 contained a broad list of companies in different business sector that have been, or will be affected by Trump’s Tariffs, include in this list are Harley-Davidson Inc. 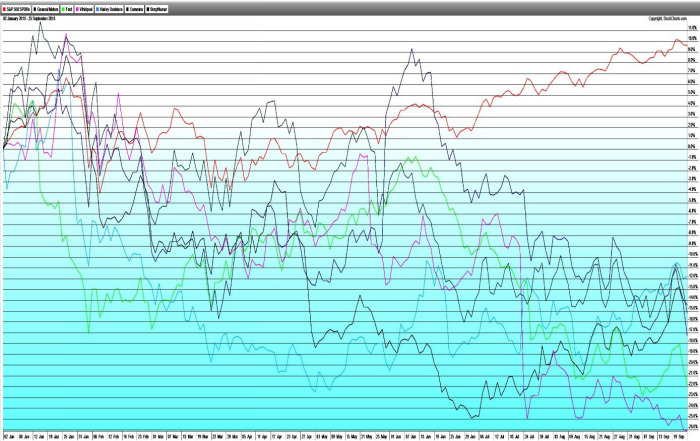 Among some of the hard-hit industrials stocks, engine maker Cummins Inc. is currently down 23% from its 52-week high after falling as much as 32%, hit by 25% tariffs on the small diesel engines and components it imports from its plants in China.

The trade fight has weighed particularly hard on shares of industrials and materials companies, which account for about one-fifth of the 80 stocks in the S&P 500 that have tumbled at least 20% from their 52-week highs—the common definition of a bear markets.

Materials companies have suffered as the tariff war undermines the outlook for the global economy. The damage even extends to some tech stocks Applied materials has suffered a slide of 37% from its March high. Also, down 30% from their highs are Lam research and Western digital.

In the meantime the WSJ piece points out that the Shares of Apple Inc. and Amazon.com Inc. are responsible for nearly 30% of the S&P 500’s 9.2% gain so far this year, of the S&P 500 indices.

While President Trump’s having a good time putting the screws to China, Trump has been able to ignore the damage to American Companies and their shareholders. As always, in the long run it will be the American consumer that will end up paying the price as the tariffs raise the prices of imported goods.

The Irony in Trump’s war is that it penalized American Companies that are trying to build their long-term competitive advantage. Here GM is a good example. China is already the world’s largest automobile market. If we project today growth rate for ten to fifteen years.

By 2030 China’s market will be several times larger than the American Market. General motors are attempting to deal with this by building a large presence in the Chinese market. This is a positive strategy just as the Japanese car companies came to the U.S. in the 1970s to learn how to compete in the world market. Any company that wants to compete on a Global scale in 2030 will have to be able to compete successfully in China.

Trump’s “American First” has a nice ring to it, but no matter what happens by 2030 the U.S. will be a much smaller portion of the world market, and it is unlikely that it will support Global Scale on any important product. The success of any American Company will be at least partially dependent on being able to compete in the Chinese’s Market.

Last summer Buffett announced that he will repurchase Berkshire’s stock in the open market at any time that he feels it is trading below his estimate of its intrinsic. This amounts to a considerable change from his previous policy since 2012, where he said he buy it back if it traded below 1.2 time his estimate of intrinsic value. Under that criterion no stock was repurchased because the figure of 1.2 times book value acted as an effective floor for the price of the stock, and stock did not trade below Buffett’s price.

This change of buy back policy lowers the risk in the Berkshire’s stock even in the face of a very strong performance in the last eighteen months. There is speculation that the change has effectively raised Buffett’s price floor to around $200 per share on the B share. But it seems premature to try to place this theoretical floor until we have a few more quarters to see how aggressive Buffett will be in repurchasing.

In the third quarter Buffett purchased $928 million worth of Berkshire stock. While this is almost a billion-dollar commitment and brought on a strong bullish reaction in the market. It does not seem to me to evidence that Buffett has a strong appetite to repurchase at current market prices.

First of all, a billion-dollar commitment by Berkshire is not exactly a huge position. So far this year Berkshire has purchased $38.5 billion in equities for his portfolio. After $14.1 billion in sales their net purchase of stocks for the year is $24 billion. Third quarter purchases included perhaps as much as $8 billion on Bank of America.

The billion-dollar purchase is nice, but only amounts to about 2% of the stock traded in the quarter and as such would not seem to be enough volume to move or support the stock. The billion spent on his own stock represents a small portion Berkshire’s total purchases for the period. Berkshire’s pervious buy back policy placed an effective floor under the price of the stock at 1.2 time the book value.

This new policy has probably will raise that floor, but it seems a bit early to estimate by how much. It may take a few more quarters to understand Buffett’s appetite for repurchasing Berkshire’s stock, and particularly how the stock will behave in a bear market when losses in Berkshire 200 plus billion in the stock holdings.

We know Buffett likes to buy stuff cheap, and though it is unlikely that he will be able to purchase much Berkshire stock really cheap, he will be patient and will be unlikely to chase the stock, or buy aggressively in a bull market. Particularly when the news is as good as it has been lately.