Here is an interesting chart that compares the value of the US market 2010 to that of emerging markets. The US market 2010 has been getting cheaper since 2000 when the PE was almost 40 compared to today’s 15. Since the beginning of 2002 the PE of the emerging US market 2010 share has increased from 12 until it now has about the same PE as US market 2010.

There are some who will say that this is justified because of the emerging market countries greater growth potential. This argument ignores the higher relative risk inherent in emerging markets compared to the US market 2010 and the current hyping of their equities by the financial media, both of which are symptomatic of bubble behavior. 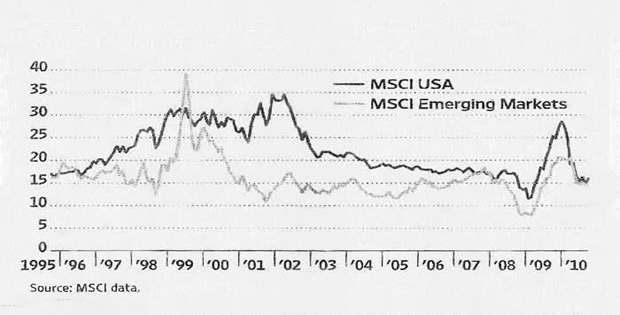 US Market and The Bubble Machine

Jeremy Grantham is one of the few people who write regularly about Wall Street that you have to pay attention to. His October letter “The Night of the Living FED” is a particularly interesting diatribe directed at the Federal Reserve. Instead of parading out the usual suspects of greedy bankers and mortgage brokers he lays the blame for our current financial morass, and US market 2010, mostly at the feet of our beloved central bank.

“If I were a benevolent dictator, I would strip the FED of its obligation to worry about the economy and ask it to limit its meddling to attempting to manage inflation. Better yet, I would limit its activities to making sure that the economy had a suitable amount of liquidity to support US market 2010. Further, I would force it to swear off manipulating asset prices through artificially low rates and asymmetric promises of help in tough times – the Greenspan/Bernanke put. It would be a better, simpler, and less dangerous world, although one much less exciting for us students of bubbles.” Jeremy Grantham

While Jeremy gets a little carried away demonizing the FED, he is essentially correct. Certainly there was a lot of damage done by greedy bankers. But, without the testosterone boost given to monetary policy by Greenspan et al., the bankers, no matter how greedy they were, would not have been able to do nearly as much damage to the US market. Lots of nice charts and tables support Grantham’s argument, and the only bone I can pick with his case is that, in my opinion, the FED had a lot of help from our political system.

Congress has given the FED the task of fighting inflation and providing for full employment. The problem is that these tasks are often in conflict – you can do one or the other, but you cannot do both at the same time. Left to pursue their own self-interest politicians tend to pressure the FED to focus on unemployment and say to hell with monetary stability. Who can blame them? Monetary restraint never got anybody re-elected.

The bottom line, Grantham says, is that Bernanke will not stop with the stimulation until he creates another bubble. When that bubble pops is anybody guess, but it is likely that will not come for quite a while and we are not as bearish about the US market 2010, as Grantham.

It is interesting that he still recommends being slightly overweight emerging markets, and believes that commodities are currently overpriced short term, but have entered a long term bull market. He believes that, while FED policy will eventually cause another bubble and the required correction, this correction will not come soon and so it is probably a mistake to fight the expansion for at least the next year. His long term view on US market is based on his opinion that “we are going to run out of everything.”

I found a further example of this view of commodities and the US market 2010 at a conference where I spent the last two days. One of the featured speakers was Charles Maxwell, Senior Energy Analyst at Weeden & Company, whose prediction is that world oil production will peak in 2015-2017 and that Oil prices will reach $300 per barrel by 2020.

It is apparent that we have heard this all before, but on the other hand, oil prices are difficult to predict and fracking in the us mayhave some impact on US market it is hard to conceive of a world with the rapid growth of the middle class in the BRIC counties that does not include rising oil prices.

Higher oil prices are not all negative, and if the increase occurs over a ten years period it will be one we can live with. $300 oil price is probably what it will take for the world to get serious about alternative energy. While this will be bad for companies manufacturing SUVs it may be a strong positive for natural gas and solar energy.

At Grant’s investment conference on the US market 2010 in New York, Jim Chanos, the famous short seller who first uncovered the fun and games at Enron, may have some suggestions as to one place where the next bubble may appear. He started out by quoting from that day’s New York Times:

“China is one very large construction zone.” In Guangdong province, the New South China Mall, the biggest emporium in the world, opened virtually without merchants in 2005. Five years later, it is virtually without shoppers. In northern China, reported, the sprawling new city of Ordos lacks nothing except people. “Broad boulevards are unimpeded by traffic. Office buildings stand vacant. Pedestrians are in short supply. And weeds are beginning to sprout up in luxury villa developments that are devoid of residents.”

Then Chanos went on to say, “Ghost malls, ghost cities and bridges to nowhere don’t just build themselves, they require faulty planning, pliable accounting and crazed lending. Maybe, he suggested, China’s bankers have been reading the pre-2009 Western operating manuals. Instead of the SIVs, or “structured investment vehicles,” of 2008 – 09 infamy, China has invented LGFVs, or “local government funding vehicles.

“Free markets have just about nothing to do with the Chinese levitation, State planning, State command and State manipulation are the leaven. It’s almost a short seller’s dream.”

Chanos proceeded to recommend four short sales not related to US market in 2010:

Further, Chanos claimed he discovered funny numbers in virtually every Chinese company he’s looked at. I do not know how to exactly how to compare Chanos’ and Grantham’s views but I would guess that Grantham might suggest that Chanos was early, and while I might agree that Chanos is right I would not join him in any of his short recommendations because as Keynes pointed out “the market can remain irrational longer that you can remain solvent”. We feel that the US market 2010 are the best place to look for the next ten years.