For Table One the stocks have been sorted by the forward PE ratio, with the cheapest stock at the top of the list. On this basis Conoco Phillips is the cheapest with a PE of 8.4. Burlington Northern is about the middle of the list with a PE of a little over 15, and generally the stocks as a group appear reasonably priced if not cheap with about half to the list showing a PE of less than 15. 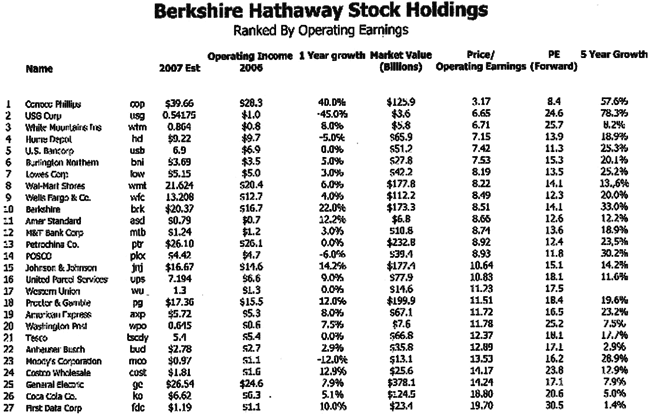 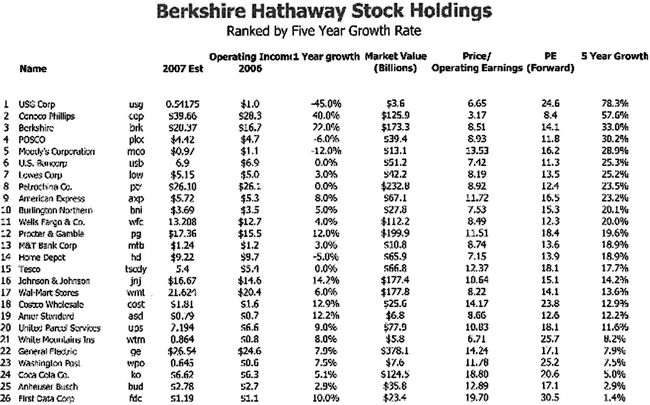 The only companies showing more rapid earnings growth are USG with 78.3%, and Conoco Phillips at 57.0% two cyclical companies ridding the tail end of their growth cycle. Neither of which likely to maintain this growth into the near future. This leaves us with the impression that Berkshire Hathaway will be able to sustain its growth at a higher rate the than the companies Warren Buffett has been buying. As of the date that this table was prepared Berkshire Hathaway was selling at 8.5 times operating earnings, and cheap as this appears it includes nothing for the operating earnings of Berkshire Hathaway’s investees.

The after tax earnings of Berkshire Hathaway’s investees haves been increasing rapidly in the last couple of years because of Warren Buffett’s equity purchases and last year increased 33% to $1,222 per share.