The white lines identify three separate long bull markets within that period with the gains during those periods detailed in the table below. The first two periods could be considered one long bull with two stages, that encompass the first major wave of globalization Stage one representing a recovery from the seven-teen year bear market that lasted from 1965 to 1982. With the first period lasting 12 years from 1982 to 1994. This bull market registered an average annual gain of 14.79%. After a sort correction in 1994 the bull market returned and accelerated for the next five years. In this second period the growth accelerated to a 27% average annual rate and was driven by a long period of double digit earnings growth, sparked by the first great wave of globalization and in part by the long bull finally generating a bubble that broke in March 2000.

In order for the current bull to eventually achieve the longevity of 1982 to 2000. It will likely require some sort intervening bear market. The most likely form of that correction would be a short recession brought by Fed Tightening.

The FED has been raising interest rates by 3/4 of one percent per year. At that speed it might take four or five years for interest rates to reach the level required to generate a recession, but if inflation accelerates (which we consider likely), the Fed will have be more aggressive, and the length of our current bull run will shorten accordingly (to maybe to 2020 or 2021)./p>

Both 1982 to 2000 bull and our present bull market began with a market recovery from a long, deep bear market. They began with a strong upward thrust from a bounce from an over-sold market. With the 1982 bull this lead to long period of double digit earnings growth that accelerated in its last five years. The fundamental factors that fed this growth in corporate earnings were globalization and technological innovation that fed this globalization. It is the ability of these factors to repeat that have the most to tell us about the future. Today, it seems the progress in technology, is if anything, accelerating. So clearly the key to understand economic grown in our country and the rest of world is the strength of the continuing trend to globalism.

The growth in global trade in the eighties and nineties was able to lift 1.5 billion people out of poverty globally. This statistic is a strong testimony to the ability of free markets to improve the quality of life around the world. It is interesting that a large portion the people brought out of poverty occurred in China, a country with a very, authoritarian government, that had chosen for pragmatic reasons (the failure of its socialist economic system to improve the lifestyle of the people living in China) to open the country’s markets to the outside world.

A recent study by the Brookings Institution estimates the current wave of globalization will bring another 2.5 billion people in Asia into the middle class by 2030. This study projected that by 2030 middle class consumer spending in china will be about three times middle class spending in the US, and India by about twice as much. While this is just a forecast, and subject to the traditional problems of forecasting the growth trends. China and India are well established with China’s growth in GDP for this year at 6.6% and India’s at 7.2 % China in particular has generated considerable momentum. 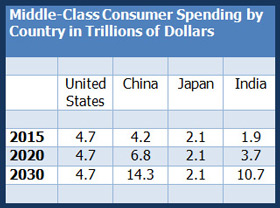 If we accept the Brookings study as a reasonable estimate where we will be by 2030, then the story will be one of profound change and creative disruption.

For American businesses with a strong international presence the opportunities will be large. A lot more customers if you have the right product. China’s growth will offer competition in most of the International markets were here is an American presence today. This and the growth in Southeast Asia has the potential to generate strong double-digit earnings growth similar to, or greater than the earnings expansion from 1994 to 2000. To take advantage of this opportunity is not going to be easy, and for any company that focuses on domestic American market will miss the much larger international opportunity.

For much of the past century the United States has led the world. Any business seeking World Scale had to enter and compete successfully in our market. In this century the game will change rapidly and any American company seeking to maintain its world scale will have to find a way to compete in China and Southeast Asia.

Focus on the present

The question, of course, is will the push to globalization remain as strong as it is today? The evidence supports that view that it will. “The Economist“ Magazine publishes a weekly table that estimates the rate Gross National Product growth for all the major countries in the world. Even though this Country’s economic growth has picked up since 2016 and 2017 and in now running well ahead of most of Europe, it is paltry compared to growth in the Asian countries on the accompanying table chart compiled from “The Economist“ data. 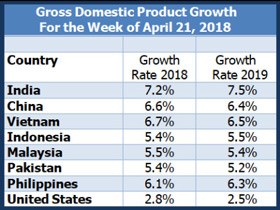 Those Asian counties have a combined population 3.4 billion people compared 324 million in the United States. Today the United States with much higher total Personal Income than China for a few more years, America can focus on “American First” if it wants, but the race for Global Scale is going on someplace else. Any International Company that can successfully compete in Asia will have access to many new customers, and the potential for many years of double digit profit growth, but no one said that was going to be easy.

Many large American Companies have seen their prices inflated by the rush into indexing. Some of those companies will not survive at least in their present form as international competition intensifies. Most at risk are large capitalization companies that do not presently have strong ties to international business.

With this strong demographic background, it is possible for Corporate Earnings to repeat the rate of growth we saw in 1995 to 2000. The keys to this potential continued strong economic growth in emerging markets. Are that there will probably have adjustment in stock valuations either through sharp down market or longer period churning movement that would give earnings a chance to catch up the stock price. (Maybe that’s what is happening now.) The longer this goes the longer or long-term bull will survive.