In contrast, Operating Earnings in the second quarter were up 73% to $3.074 billion, and up 52% for the first half to $5.296 billion. Buffett prefers the use of operating earnings as a measure of Berkshire Hathaway performance because the operating earnings are not distorted by the mark to market calculations for the long term put contracts, and other derivatives that Buffett sold several years ago. This bit of GAAP gymnastics causes quarterly swings in net earnings of several billion dollars, and has made the quarterly GAAP figure (net earnings) that Berkshire Hathaway has reported for the last couple of years misleading to the point of being almost meaningless.

Berkshire Hathaway’s put options have being discussed here on several occasions and it is still our opinion that they will provide a very nice profit by the time they expire. The $2.2 billion loss that Berkshire Hathaway was required to report for the second quarter follows a similar sized gain that was reported in the first quarter of this year and also in the second quarter of 2009. This is unfortunate, and it makes mark to market accounting look pretty silly in its application to these circumstances. It means that, in the case of Berkshire Hathaway, we have what can only be considered a very strong quarter (operating earnings up 73%) while the reported earning show decrease of 40%.

In an attempt to get a better idea of what is actually going on at Berkshire Hathaway, I, as investment manager, decided to update my version of the Berkshire Hathaway Twenty-Three Year Two Column Valuation table. 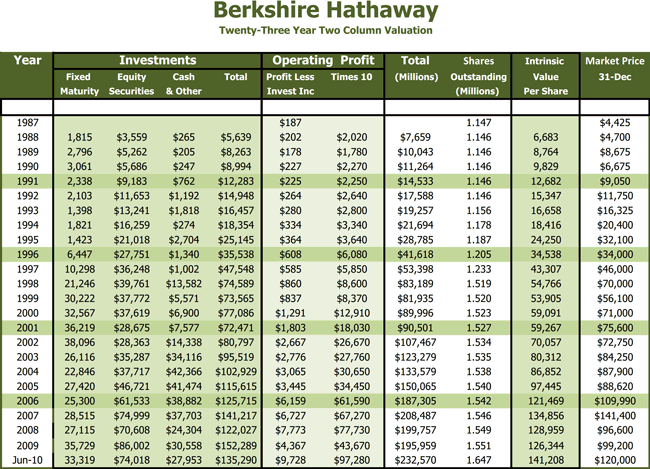 This is a method of valuation that Buffett has used to find an intrinsic value for Berkshire Hathaway. While this method is helpful, it is not perfect, as it tends to understate Berkshire Hathaway’s value during periods of market weakness (2008 – 2010). Now, the market has rallied off 2009 lows, and Operating earnings have become a larger factor in valuation with the Burlington Northern merger so I thought it would be interesting to take a look at an update of this table. Figures for 2010 are estimated based on including Burlington’s figures for the full year and estimating the other operating companies based on their results for the first half. Operating earnings listed on this table are pre-tax and taken from page 58 in the Berkshire Hathaway Annual Report. 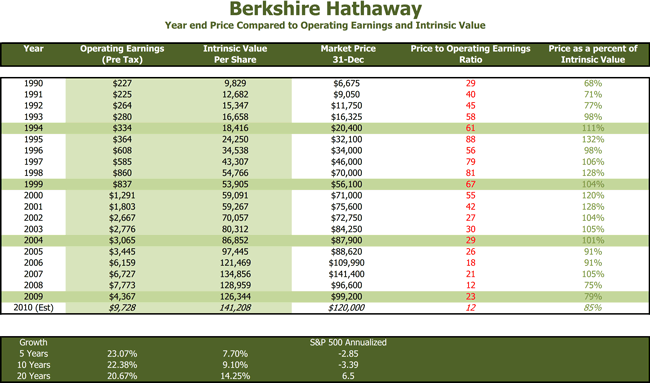 Note that intrinsic value shown here is taken from the two column table, and that this method of calculating IV is strongly influenced by the current stock market prices. This explains to some extent why the growth of intrinsic value as estimated with this method lags the growth in operating earnings. This is also a reflection of the fact that Berkshire Hathaway’s stock portfolio is not growing as fast as the operating part of the company as Buffett now prefers the complete acquisitions of companies as opposed to stock positions.

I, as investment manager, included figures for the performance of the S&P 500 Average because this gives us a comparison to the overall stock market and indicates that even though Berkshire Hathaway’s recent performance lags its long term record, it is still quite strong relative to its’ environment, and allows us to hope the company’s long term performance will improve when the market environment gets better.